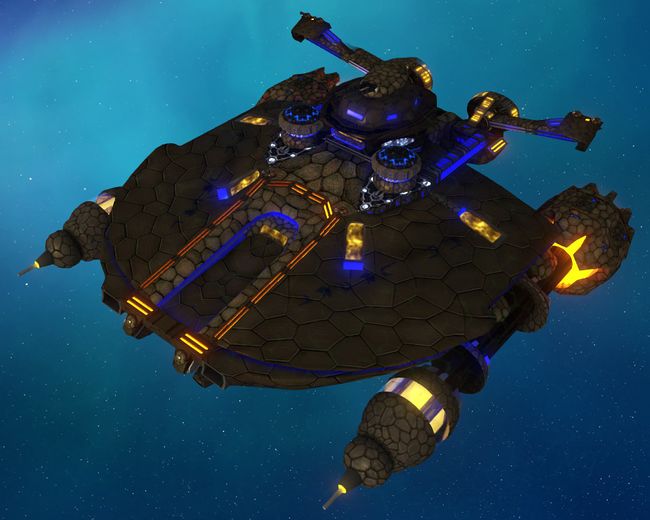 Prototyped for the first time a few years after the Capella incident, the GVCv Mahal can be seen as a major breakthrough in capital ship design. Utilizing data from the few available scans of the SD Lucifer and observations made by the Vasudans during the bombardment of Vasuda Prime, for the first time in Terran-Vasudan history engineers managed to install a shield-system on a vessel above the size of a gunship. As the power demands towards a ship's power supply to sustain a shield-system of meaningful magnitude are enormous, and far exceed anything a cruiser sized ship ever could hope being able to deliver, the two shield generators had to be placed on a ship the size of a corvette, and even there on the outside of the hull, presenting a weak spot for enemy craft to abuse. Additionally, engineers find it difficult to confine the shape of a shield that big to the exact dimensions the ship, resulting in a rather big gap between shield and hull. Therefore, pilots accompanying one of these corvettes are well adviced to watch closely for enemy bombers trying to bypass and destroy the Mahal's shield-system. If properly protected though, a Mahal is nigh invincible against all attacks from a distance, except with beams, which resemble the greatest threat towards the Mahal's relatively low structural integrity. The cost to produce one of these ships is much higher than a Sobek's, but this fact is countered to some extend by the GVCv Mahal's much lower repair costs, as it often will leave battle unscathed where a Sobek or Deimos would have taken up to medium hull damage or have half their turrets destroyed. The vessel's main attack consists of two very powerful destroyer sized beams, whose main drawback is their long recharge time, being installed on a craft of much smaller size than a destroyer.

Much like the SSP Chakra, this ship has a shield submodel with a rotating animation and animated glowmaps (it is very faint and hard to see), as well as multiple rotating subobjects.