Ancient-Shivan War ( a.k.a. ASW ) is a mod for FreeSpace 2 Open that attempts to replicate the battles between the Shivans and the Ancients. The mod has released two acts, but the third act was canceled. 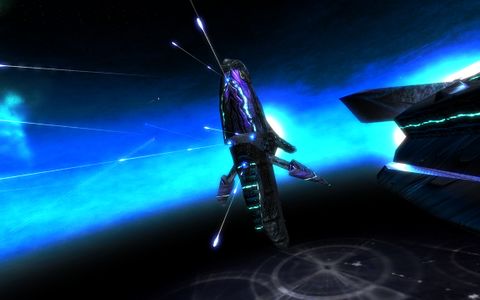 An Odigitria-class destroyer in action

The campaign features many Ancient ships from Inferno R1 and Inferno SCP as well as some brand-new ships. Along with the new ships there are multiple other mods to bring you an entirely new experience, while still keeping the FreeSpace feel.

The Ancient-Shivan War takes place in the distant past, putting the player in the role of one of the many Ancients as they fight desperately, and ultimately futilely, to save their empire and home from the Shivans. The player has the opportunity to pilot numerous Ancient ships as they take their part in the epic struggle for survival. 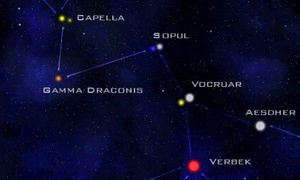 The mod portrays the Ancients as an arrogant race confident in its superiority. Briefings and mission messages constantly reinforce this self-identity. At one point, the Ancient Empire is regarded as invincible.

Technologically speaking, their fighters are heavy armored, but lack shields. Their warships are equipped with relatively strong standard turrets, unlike the Aesdherians, who possess both shields and beam weaponry. It is never directly explicated why the Ancients did not steal either shielding or beam technology from the Aesdherians, but it is suggested by various staff members that the Ancients could not be bothered to study an inferior race's technology.

The Ancient Empire is governed by "the Core," which is their equivalent of the government. However, the Ancient pilots do address "Command" in the missions. The highest known Ancient military rank is Fleetmaster. During Act I, only one Fleetmaster is referred to: Fleetmaster Im'Halus, who abdicates at the end of A bridge too far. Pilots are referred to as "(battle) brothers and sisters" or simply "warriors." Pilot also appears at some points in dialog.

Ancient war assets are classified along the lines of their GTVA equivalents: They possess fighters and bombers, distinguish between interception, space superiority, heavy assault, and bomber roles. They use a similar array of destructive weaponry such as heat- and aspect-seeking missiles, dedicated anti-warship bombs. Surprisingly, there are no pure tactical weapons like subsystem disruptors or EMP weapons.

There are two missions in Act I which automatically grant promotion. Consequently, it is possible to advance two ranks for each play through.

Personal diary of Khor-tu-khet, stranded on Altair IV. The Shivans have attacked and destroyed our outpost. With only very little cover available - we were a civilian research station after all - we started evacuating as soon as they jumped in. But it was no use. We, and Rho wing covering us, were the only ones that could make it out. The others either fell to the Shivans, or died when the station's reactor exploded.

We headed for Altair IV, an uncharted planet. Although our escape pods are not meant for atmospheric flight, they should - in theory - be able to withstand a forced landing. We wanted to get out of space as soon as possible, so the Shivans wouldn't follow us.

To us, it has been painfully proven that theory is just that, theory. During the descent, our pod became so hot that water would evaporate inside it, and it shook so violently that we didn't know when it had touched the ground. None of us came out unbruised, but luckily we were still alive.

While exploring the area and looking for the fighters - they had landed at a safe distance away from us - we found a cave. It looked like a good place for shelter. It turned out to be an incredible discovery...

Of course we knew that there had been species before our own, but we had never found any traces of them. This discovery was more than we could ever have dreamt of... It seemed as if they had come back to life.

ASW is a solid, high-quality mod with a unique atmosphere. While the plot is rather simple, it provides a much-needed background for further releases. The Ancients are portrayed as an arrogant race that views itself invincible, and that's essentially the point of Act I. Combat is slower paced than that of most FS mods, which derives from the underdeveloped weapons the belligerents use. The mod placed the most emphasis on graphics (including a new interface, effects, backgrounds) and it looks really good. Custom music also gives a boost to an already alien atmosphere. The only problem I can see with the re-release is the endless wave of uncounterable Aesdherian missiles in the early missions, making survival a matter of luck, not skill or clever tactics. I recommend ASW for all who seek a diversion from the original FreeSpace feel. - TopAce 18:18, 11 November 2010 (UTC)

One of the best mods. The overall atmosphere is awesome, hugely thanks to the excellent choice of music. Everything works without a hitch, which is a lot in and of itself. The plot may not be a Blue Planet -esque in-depth work of art, but it is very solid. Definitely a Thumbs Up. -MrTealTwo

From a gameplay perspective, ASW is interesting: combat is faster-paced than in FS1, but slower than in FS2; this is largely because of the weaponry the Ancient warships use. Instead of beam cannons, they are equipped with what are essentially advanced blob turrets. The storyline is fairly basic, but it does have one interesting feature; rather than being portrayed as victims, the Ancients, intentionally or unintentionally, come off as an army of xenocidal racists that brought on their own destruction. Definitely worth a playthrough. 8.5/10 - Apollo.