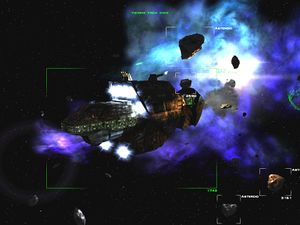 Several asteroids on a collision course towards the NTF Iceni.

Collisions with asteroids can cause considerable damage to a ship's hull integrity. As such, asteroids are a secondary target of warship turrets and escort fighters. Asteroids on a collision course towards a vessel on the escort list are highlighted with white brackets on a ship's HUD. These must be destroyed before they impact the escort ship. Notable missions which involve defending important ships from asteroid collisions are Paving the Way and Rebels and Renegades.

Although generally larger than fighters, asteroids are comparatively easy to destroy, as only a few hits from even the most basic weapons are required to break them up. When asteroids are destroyed, smaller fragments are formed; if the fragments are large enough, they may still continue on a previous collision course, and therefore must also be destroyed in turn.

Like any large, solid object, asteroids are not repelled by shields. Consequently, caution must be taken whenever in the vicinity of an asteroid, as an impact with one can cause serious hull damage to fighters and bombers, with or without shields. 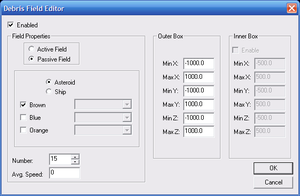 The asteroid field editor in FRED.

Asteroids are usually generated using the Asteroid Field editor. This feature creates a box of the given boundaries, within which asteroids will be spawned. Two types of fields are possible: Passive and Active fields. Passive fields will generate asteroids moving along random trajectories at a given speed, while active fields will deliberately hurl asteroids at the first large ship in the ship list found within the boundaries of the field. Active fields can also be assigned with an inner box, within which no asteroids will be spawned.

Three different asteroid sets are available, these differ only in texture (brown, blue and orange). Passive fields can also be set to generate ambient ship debris from a given species and size as an alternative to asteroids.

There is also a ship called Asteroid in the ships list. This asteroid is very large, but it does not move and cannot collide with objects. Its main purpose is to provide a ship class for asteroid icons in briefings. The texture of this asteroid appears to be less detailed than the ones generated with the Asteroid Field function.