Difference between revisions of "Beam weapon" 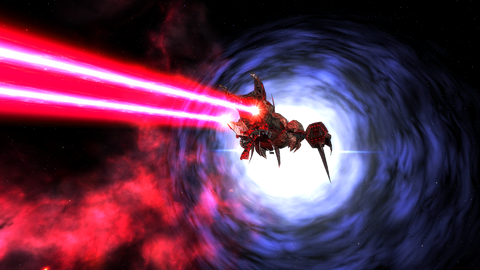 Beam weapons, or beam cannons, are powerful weapons systems mounted exclusively on warships. They are used to engage other warships in combat, and for point defense against fighters, bombers, and warheads.

During the Great War and the GTI Rebellion, the Terrans and Vasudans encountered the Shivans, a previously-unknown alien race. Both species took note of the technological capability of the Shivans, particularly the main guns of the Shivan command ship, which they termed "Flux Cannons". The two races opted to replicate this technology after the end of the GTI Rebellion in late 2335. The result of this pursuit was the invention of the deadliest and most advanced weapons of war ever created by either race, called beam weapons. The first class of ship which was fully designed with beam weapons in mind may have been the GVCv Sobek, which is said to have entered service shortly after the destruction of Vasuda Prime. Further advancements enabled engineers from both races to mount these weapons on older vessels never meant to accommodate them, as well as less powerful, more energy-efficient versions on smaller ships.

Sufficient reactor power is required in order to fire beam weapons. Therefore, they are never mounted on fighters or bombers, which have reactors too small and too weak to support the power drain. For a time, the Vasudans' Typhon-class destroyers encountered similar issues, with most of them suffering from reactor overloads and system failures due to their power grid being unable to cope with the power needed to fire the beams equipped on them. The deployment of the Hatshepsut line of destroyers would rectify this problem.

In general, beam weapons are designed to be fired against ships larger than bomber-class, which are large enough to be targeted with. These are generally called "anti-capship beams" by players. However, smaller, lighter beam weapons exist that deliver less damage than anti-capship beams but are capable of targeting even fighters and bombers. These are recognized as "anti-fighter beams" in FreeSpace canon (dubbed "AAA beams" on occasion by players due to their names in the FreeSpace 2 table files). The advancement of the beam weapon in the Terran and Vasudan fleets is sufficient enough to enable the most powerful anti-capship beam from either race to easily cleave through most cruisers and corvettes in minutes and deal significant damage to destroyers, if not destroying them outright.

Most Terran and Vasudan beam weapons are meant to be fired at a specified power output, dealing a consistent rate of damage assuming that the beam in question strikes its target for the entire duration of its lifetime. However, if the situation warrants, it is also possible to reduce power output to limit damage done, or increase power output beyond specified limits to increase damage rates; the latter comes with the risk of emitter and heat sink deterioration. Examples of ships that have taken either course of action are the GTC Rampart during a feint attack on two cruisers, and the GTVA Colossus, during its engagement with SJ Sathanas 01.

There are four beam types included in retail FreeSpace 2, but only the first three were used throughout the course of the game.

Both the Terrans and Vasudans manufacture and make use of the first three beam types. The Shivans, however, utilize only the first and third types.