A briefing is a convocation of military personnel to discuss military affairs. In the FreeSpace games, there are three kinds of briefings: command briefings, mission briefings, and debriefings.

CBs are very often complemented by a 2D animation that is being played in a small box next to (FreeSpace 1) or below (FreeSpace 2) the command briefing's message. Uses of these animations vary greatly, but two categories can be drawn: There are animations that serve a storytelling purpose (animated node maps that indicate fleet movements) or are simply for aesthetic purposes (seeing your flagship from several angles while it is patrolling). If no animation is set in the Command Briefing Editor in FRED, the default animated GTA (FreeSpace 1) or GTVA (FreeSpace 2) logo will show up.

Command briefings consist of stages. There is always one block of text and one animation associated with each stage.

If there is a command briefing in the mission, it will be the first window that appears as soon as the mission is loaded. If the player clicks on the Continue button, or presses SHIFT-Enter, the mission briefing will come up.

The music that you select for the mission briefing (SHIFT-B) will be played here. 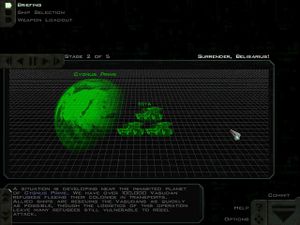 Mission briefings also consist of stages, much like command briefings. There will always be one stage on screen at any given time. Every stage has a picture and a block of text associated with it.

These pictures are not JPEG or ANI files, but they are a group of ship icons on a black background. These icons are made by selecting any ship in the game and clicking on Make Icon. An icon will be drawn immediately to the position of the selected ship. If your selected ship is out of sight, change your camera's position (in the Briefing Editor!, not the main menu). This is done most conveniently by using the Zoom Selected (ALT-Z; only works if you have anything selected) feature. You can freely move the icons around, label them, change their IFF affiliation as much as you like. It makes no difference if a friendly Fighter Wing icon is made out of a hostile Orion. Beware of accidentally moving away any ships. It is safest to be in Select Mode (clicking on the cursor icon in the upper-left corner of your FRED window). Another safe way of selecting any ship is the Ship Select Window ("H") or using a rectangle selection. Zooming in or out will not alter the icons' size.

Add Stage adds a new stage after last stage. FRED will not give you a blank window and force you to restart, but instead it will clone the stage that comes before the new one. You will have to blank out the text and write a new one, but the ship icons will remain intact. You can create, delete, or move away ship icons.

Beware of deleting ship icons in the early stages of your mission. If you delete a ship icon in stage 1, and that ship icon is present in stage 3, it won't be displayed. If you want stage 1 not to have that fighter icon, you can simply delete the icon in stage 1 and create a new one for stage 3.

If you want an audio file to be played during the briefing stage, set it in the Voice Wave File option. Your Voice Wave Files must be put into data/voice/briefing.

You can set a briefing music with the Briefing Music option. If you have a command briefing, this music will also be played there.

At the end of the briefing, the player will receive a list of mission objectives that are created using the Mission Objectives window (SHIFT-G).

At any stage, the player has the possibility to select his weapon and ship loadout. Mission designers can determine which classes of ships and weapons the player may choose in the Team Loadout window (SHIFT-P).

If the player presses Commit, the mission will start. 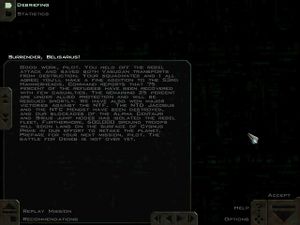 A debriefing for Surrender, Belisarius!

Debriefings are for evaluating the player's performance and talking about the consequences of the mission's outcome. If the mission ends by the player jumping out—or in FreeSpace Open with the end-mission SEXP—the debriefing window will come up.

Debriefings also consist of numerous stages, but unlike command and mission briefings, the player is not restricted to one stage per window. In order for a debriefing stage to appear, it must meet certain preconditions set in the left-side window of the Debriefing Editor using SEXPs. All the stages that meet their respective prerequisites will appear in the debriefing window, in the order they are numbered in the editor. (If stage 1 is true, it will forever be on the top, etc.)

The mission designer cannot determine which music will be played during the debriefing. It is determined by the outcome of the mission based on the mission goals set in the Mission Objectives editor (SHIFT-G).

It is also in the debriefing stage of the mission that the player receives promotion or medals. Promotions and badges (Ace, Double Ace, Triple Ace) are granted automatically, while medallions (Good Conduct, Conspicuous Gallantry, etc.) must be granted by the mission using the grant-medal operator. The player can receive these awards only if he is allowed to progress in the campaign. By this definition, standalone missions that are played in the Mission Simulator do not award promotions, badges, and medals.

Clicking on Accept will return the player to the Main Hall (simulator missions), load the next mission (campaign mode), or request the player to replay the mission should the mission's outcome be unfavorable (campaign mode again). Whether the player can progress in the campaign is determined by the campaign's tree, set in the Campaign Editor (SHIFT-C). For further information about setting up a campaign file, see Setting up a campaign file.

There is no such thing as an "incomplete" Event or Mission Goal in the debriefing. When the mission ends, all SEXPs that are "incomplete" will turn false. Therefore, using is-goal-incomplete or is-event-incomplete equals using false. A debriefing stage that has any of these three operators in it will never show up.

A FREDder must evaluate whether each debriefing stage comes up when it should and whether the tone of the stage is appropriate for the outcome of the mission. There is no point in Command congratulating you for destroying the GTC Secondary Objective if GTD Primary Objective was destroyed. "Invalidate" debriefing stages using the and and the is-event-false operators. A properly done scenario of the above example is as follows:

Which will ensure that an appreciative debriefing stage won't come up if the mission ended catastrophically.

These tags can be used to manipulate text messages in command, mission, and debriefings. For further explanation, see Briefing Text.

These codes work in all three briefing stages as well as in mission messages:

As of 3.6.12, a number of changes were made and additional flags were added.

$| makes characters following it the default text. Can be inserted directly between characters.

$o makes the word that follows it orange.