This article is about the preview version of Descent: FreeSpace. If you're looking for the player pilot, please see Alpha 1. 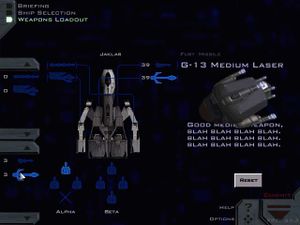 Evidence of the remnants of the G-13 Medium Laser from FreeSpace Alpha.

Before the retail release of Descent: FreeSpace, a number of Alpha and Beta versions were shipped to various testers and magazine editors in order for them to get a preview of what's coming, plus it allowed them to advertise the coming game. There was a lot of unique gameplay content in the Beta and the Alphas—of which there was a total of two; content that was not included at all in the released versions of the game or was changed to the point of unrecognizability. Some of the Alpha-only content included things such as unique ships—the Shivan cruiser Caldera and the Terran cruiser Juggernath—and unique dialogue deepening the storyline.

Some graphics decisions unique to the Alpha are, amongst other things, a completely different HUD with shield integrity as exact percentage instead of graphics, a different pilot stat screen with your current fleet affiliation on display and totally different pilot appearance graphics, different POF models and mission backgrounds including multiple planets (official screenshot of early planet background here).

In the earliest phases of development, and thus apparent in the Alpha screenshots, the fighter and bomber ship models disintegrated in the same fashion as the ships in the 6DoF Descent series, i.e. the ship's fuselage got literally "blown to bits". This was probably deemed too processor heavy, and was quickly dropped. Not a single screenshot post-Alpha reflects this earlier development decision.

Unique weaponry for the Alpha included weapons that are still present in some of the screenshots on Volition's official FreeSpace site. Look for evidence of the the Mag-Pulse and Angelfire missiles (screenshot here), for instance, check for stats below. The screenshot is also proof that the Rockeye secondary was already part of the Beta release, and was simply re-introduced in FreeSpace 2.

The Alpha/Beta versions also included unique dialogue. Some of the generic lines present in the Alpha/Beta releases were later dropped in favour of the present ones, such as "Enemy at three o'clock high!", "Sir watch your tail" and "Enemy fighters just appeared on radar".

The pre-release version(s) of FreeSpace had unique weaponry, both primary and secondary. The point of interest is that many of the Alpha names are still present in the retail version(s), namely as the names of the sound FX files. These names can easily be read by examining the VP files. 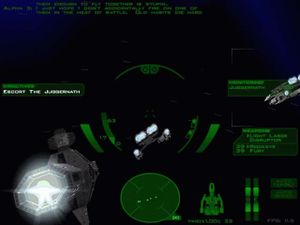 Screenshot from the near-mythical Juggernath mission.

The Alpha versions of FreeSpace also contained unique missions. There were a total of three missions in the Alpha versions, two of which are the ones we know from the FreeSpace 1 Demo. The third Alpha-only mission—the second in the Alpha "campaign"—is arguably the most interesting of them all. This is the mission where Alpha wing is ordered to escort the lone Juggernath, a Fenris-class cruiser.

The mission also contains a lot of unique dialogue, dialogue which explains the sentiments regarding the newly-founded Terran-Vasudan alliance and deepens the storyline, highlighting the still present animosity towards the Vasudans. A line from Alpha 3 in the mission might serve as example; "I just hope I don't accidentally fire on one of them in the heat of battle. Old habits die hard".

Other differences—differences that might seem trivial but have quite an impact on the developing story—include the casting of the main character as part of the GTC Orff's crew, rather than as a part of the GTD Galatea's crew.

Please note that the first Alpha version handed out to (p)reviewers was not playable. Most of the first Alpha only consisted of pre-scripted action. The final pre-release version, however, was playable and was thus shipped out to reviewers/testers as a novel "Playable Demo". The "Playable Demo" moniker is still present on the load up screen of the officially released Descent: FreeSpace demo.