Difference between revisions of "GTB Athena"

The GTB Athena (dubbed the "Lightning Bomber") is a Terran light bomber introduced during the opening stages of the Great War. Although unable to carry the heavier anti-capital warheads, the Athena is the favored delivery vehicle for the anti-subsystem Stiletto missile, making it highly effective for surgical strikes.

Being the lightest bomber of all known Terran bombers, the Athena provided a reasonably effective deterrence to hostile fighters, and has on more than one occasion been mistaken for a fighter.

The smallest bomber in the fleet, the Athena has oftentimes been mistaken for a fighter. However, one should not be fooled by its small size. The Athena can carry light bombs, and most missiles. It also has the ability to dogfight well. Its strong shielding and hull make it the favored "Lightning Bomber" of the GTA.

Excellent for hit-and-run bombing. Good speed for its size, with a high capacity afterburner reserve.

In Greek mythology, Athena is the goddess of heroic endeavor, and the daughter of Zeus. Athena was also a companion, or simply helper, of many other Greek mythological heroes like Heracles. It is said that Athena was warlike, much like Ares, her half-brother. 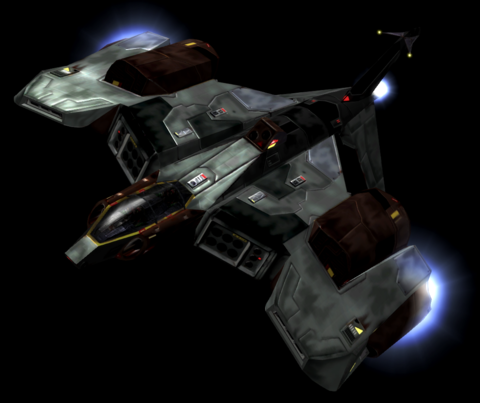 The GTB Athena in the FSPort MediaVPs.

I always wanted to love the Athena, but its lack of any serious anti-cap ship capablity made it a non-choice when going against anything bigger than a transport.

The Athena is the ultimate tool for a fighter pilot. But not a bomber pilot. It has higher speed than the Hercules, good maneuverability, and can haul an equal if not greater amount of ordnance. It has a thin target profile from the the sides and front-back. Its gun setup is the best for dogfighting or bomb interception ever seen in a FreeSpace game, more than compensating for its inability to carry the Prometheus or Banshee. If you want to carry real bombs, though, you'll have to get a Medusa. The Athena also functions frighteningly well as a kind of heavy interceptor, with a full loadout of Phoenix Vs (10 per bank, which means 20) and good speed. Imagine flying this as a heavier Apollo that sacrifices the Prometheus for the Phoenix V, and you'll be fine.

If it could carry the Prometheus or the Hornet, I would prefer it to the GTF Hercules as a heavy fighter, but the lack of these and any proper bombs means there's always a ship better than it for most missions. On the other hand prior to the more advanced ships and weapons it does make a good heavy complement to the Apollo and the Valkyrie.

The Athena is probably one of the best ships in the whole FS universe. It's fast, maneuverable, hard to hit, has great primary weapon placement and can take a lot of punishment. It can't carry the big bombs, but then again, crippling strikes are its forte. Loaded with Stiletto and Fury missiles, it can quickly disarm and disable any ship, making it a easy prey for others. The only real downside to this jewel is its incompatibility with some of the more advanced weapons.

This is the ship I swear by. The speed, amount of maneuvering it has, shields, and amount of ordnance it can carry, along with its almost nil front/side profile. With the exception of speed, I view this ship as the ideal anti-bomber ship, largely due to its ability to pepper a bomber squadron down to almost nothing (mostly with Fury and Synaptic warheads), and then swoop in to finish the stragglers off. I single-handedly finished off the Hades with this ship, and prefer it highly over any Hercules variant, or the Zeus, with its far larger target profile, facts which plagued me for much of FS2. Why the Athena had been chucked for the Zeus (which is slower, packs fewer missiles, and disturbingly more fragile), or never re-entered circulation as a proven ship (imagine if it could carry Piranha or Infyrno warheads), nobody will ever know.

Think of the Athena as similar to the Herc Mk II. It's more fragile(250/500 hull/shield compared to 275/610 for the Herc II), carries less ordnance(80/80 to 80/100), is larger, and has the same afterburner speed, but is faster(60 to 55m/s) and has gunpoints far better placed for engaging enemies than the Herc II. Your best bet for using this ship is to follow the tried and true method of Interceptor spam for dealing with fighters, Phoenix spam for dealing with bombers, and Stiletto spam for dealing with warship turrets. The gun placement will allow you to better pick off anything that gets too close, and quad Avengers are good enough against most threats. For cruisers, just load up on Furies, but a Hercules with dual Prometheus and Hornets or a Zeus with dual Prometheus and Tsunamis will do the job far faster.
Retrieved from "https://wiki.hard-light.net/index.php?title=GTB_Athena&oldid=58399"
Category: