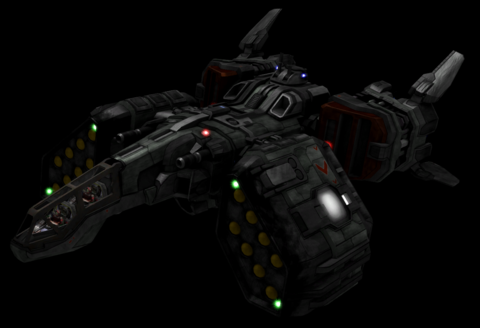 When playing on Insane difficulty, these seem to be the only bombers (besides the Bakha) that try to evade your primary fire. Luckily, they're not especially maneuverable.

Heavily appreciated in FS1 for being the first actual bomber you can use, and objectively superior to its Osiris counterpart on the PVN side, the Medusa is functionally obsolete as a bomber the moment the Ursa arrives. The Ursa has superior long-term durability, more firepower, and a bigger ordnance bay. On the occasions where the Medusa can be used in FS2's campaign, the Artemis or Boanerges are available (and sometimes the Ursa), and all three have superior overall performance to the GTA's first proper bomber. The plusses I can give the Medusa, however, include having better gun placement than the Artemis and having an occasionally useful turret.
Retrieved from "https://wiki.hard-light.net/index.php?title=GTB_Medusa&oldid=63049"
Category: