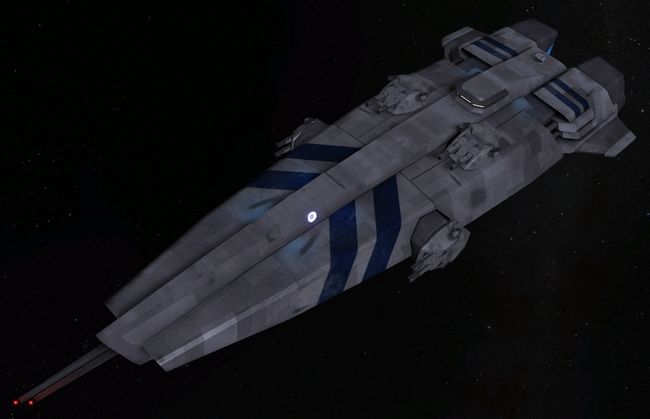 Oldest of the next-generation GTVA warships, the Hyperion cruiser represents the Alliance's best shot at a new niche for the aging cruiser hull - a scout, skirmisher, and anti-fighter platform that can conduct reconnaissance by fire, draw off bomber wings, and engage larger ships from range with its Thorn Lance light beams.

With corvettes dominating the the main line combatant role, cruisers must be deployed - and built - more carefully. Hyperion captains train to respond to their many predators, including heavy assault wings and beam-armed warships.

After Capella, the Threat Exigency Initiative launched a push for new military technology and doctrine. At the center would be a next generation of warships, more agile, sophisticated, and survivable than their ancestors: capable of sliding around Shivan concentrations and applying force to gaps and weaknesses.

They would also be more expensive. Unfortunately, the Terran economy had just flown into a supernova.

GTVA High Command issued a requirement for a next-generation cruiser that could serve as an escort, skirmisher, and screen element. It would have the anti-fighter prowess of the Aeolus, a highly capable subspace drive, next-generation power systems, and electronic warfare capabilities. All this was true, but it was also a smokescreen.

In truth, the Hyperion-class cruiser was an attempt to shake down next-generation systems...and next-generation procurement. The Admiralty took a torch to the connections between the officer corps and Alliance contractors, then rebuilt the procurement system with brutalist efficiency. Careers flared up, burnt out, and spiraled off into nothing around the Hyperion as teams fought to get their systems on-board.

Economic sequestration placed the Hyperion in danger of cancellation, and suddenly project teams began withdrawing, trying to avoid tying their technology to a failed warship. This left the baffled hull designers with no choice but to build a ship without knowing what equipment it would carry.

The team drew on experience with the Deimos corvette to build the ship from the reactor out, selecting a simple hull form and flexible power grid. This allows the Hyperion to easily mount new systems. Even the forward beam cannons are trivial to replace if destroyed, since the emitters are isolated from the plasma cores.

The first block of Hyperions served as a testbed for meson reactors, pulse weapons, and next-generation beams. Although successful as anti-fighter pickets and reasonably affordable, they didn't hit the mark for subspace agility or anti-ship firepower. The class is still rolling through a series of block upgrades, expanding electronic warfare capabilities and installing survivability packages for the main weapons.

The Hyperion is notorious for the so-called 'bad quench' failure mode of its meson reactors, which severely limits the crew's chances of survival in the event of a hull loss.

For one of Blue Planet's next-generation warships, the Hyperion is a little underwhelming; her SBlue beams are fairly anemic, if not as poor as the SGreen, and she lacks the firepower or endurance to fend off fighters. Her pulse weapons do give her good standoff defense against incoming bombers, however, and on higher difficulties, they can pose a serious threat to fighters. All in all, while a useful warship, it's easy to see why the GTVA retains and continues to produce the Aeolus in the Blue Planet era.

A few weakness in its design allow it get easily tackled by bombers and fighter swarms if used correctly. The front of it has no guns other than its two front firing beam cannons that don't even fire at warships half the time. The back of it is also a good bet, but be mindful of the engine wash. Attacking it from the top, sides, or bottom is a more effective way of committing suicide; you will die really fast.

Against Shivan fighters and their swarm attacks in Age of Aquarius, it's better than the Fenris and Leviathan, but its anti-Shivan-fighter capabilities are not on par with the Aeolus. It will cope reasonably well with bombers, with 4 Terran Turret 2s but prioritize any heavy assault fighters that target this. In War in Heaven these cruisers are remarkably effective against Federal fighters, nearly as effective as the venerable GTC Aeolus and your Kentauroi will not last long in the pulse cannon fire. If you're attacking one, approach it when possible from the rear. When that's not an option target the weapons system and try to take it out at range, or as quickly as possible. In the anti-warship department, a Hyperion is about as effective as a pair of Cyclops toting bombers, if a fair bit more survivable.