Difference between revisions of "GTCv Diomedes"

For the model used in older releases of Blue Planet, see GTMf Sparta.
For the canonical Deimos-class corvette that appeared in The Sicilian Defense, see the FreeSpace 2 Terran Ship Database 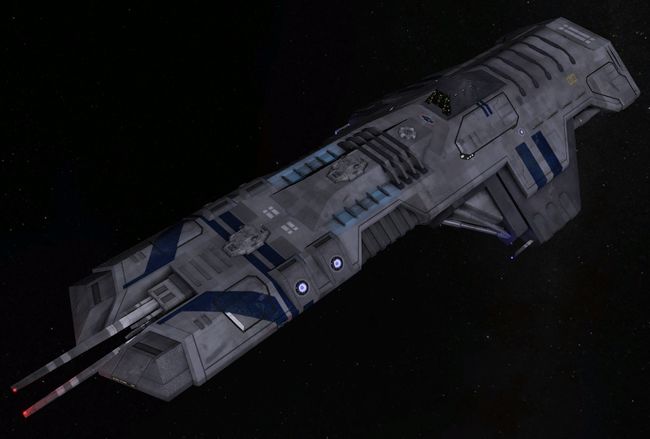 GTVA designers conceived the Chimera and Bellerophon-class corvettes hand in hand with new doctrines of massive force application. These designs were intentionally overspecialized to neutralize Shivan destroyers and juggernauts with beam alpha strikes. Strike craft support, aggressive subspace maneuvering, and sheer shock would, it was argued, allow the Chimera and Bellerophon to outrun their own design weaknesses.

This ship has great potential, but suffers from a major, glaring flaw: a huge sparsity of turrets on large sections of the ship. The wings/fins, in particular, feature a single AAA beam that shares most of its coverage with another AAA beam on the sloped sides of the radar tower. Given that the Diomedes has a major advantage in point-defenses over other corvettes (in the form of a dedicated fighter bay), this flaw is also rather unnecessary. The Diomedes is also completely lacking in forward armament, and its rear-facing armament isn't all that great, either. Where the Deimos corvette achieves much of its success from having turrets all over its surfaces and excellent field of fire, the Diomedes is jarringly barren in the turret department. Approach from the rear and you'll avoid most of the point-defenses; as a capship, approaching from forward, behind, and directly below will also put you out of range of the slash beams, as well, though the ship's incredibly maneuverability means that it can easily bring those beams to bear if it wants to.