Difference between revisions of "GTD Nephelai" 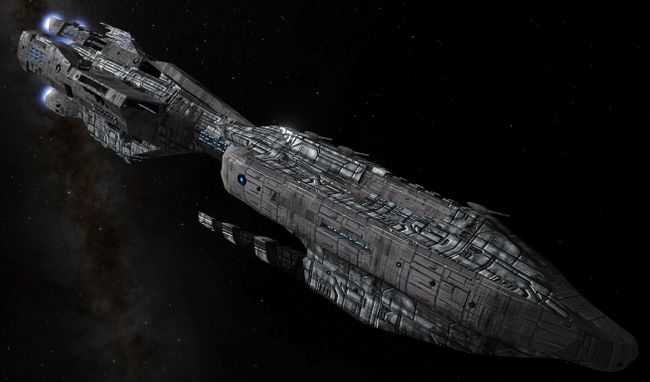 The slender and subtle shape of the Nephelai-class destroyer gives this warship lots of finesse and makes it one of the most unique and characteristic units in the new GTVA navy. First constructed in 2378, it has quickly become a common sight in the Alliance. The Nephelai is an innovative project from Mesa Corporation teams that spent long months working on ultra-modern design based on the newest technical solutions. They used their experience from the construction of Deimos-class corvettes. The Nephelai is based on modified plans for a new corvette class that was to have served as the Deimos' successor, whose projected potential turned out to be much greater than initially considered. Two large fighterbays were added as well as characteristic powerful long range sensors, with the subsequent design been rescaled as a result.

At over 2500-metre-long this behemoth is armed with 7 heavy beam cannons placed on the sides and 4 Geodess-1 missile launchers. Carrying a different armament than the GTD Preliator, the Nephelai is specialised in short-range fire and side combat. It is a perfect defensive unit that is specialised at jump node blockades alongside the RBC Mjornir cannons. The destroyer also has better anti-bomber defences than the Preliator and Hecate classes. Rebels from Cerberus Legacy know of this class and try their best to avoid it ever since the GTD Resdayn of Ross 128's 18th Battlegroup crushed an important rebel installation near Barnard?s Star and defeated a large enemy task force.

This ship offers surprising power output. Paired BGreens on each side with addons of TerSlash and swarm torpedoes provide it with devastating damage potential. Nephelai behaves a lot like a GTD Raynor, with majority of firepower concentrated on long broadsides. Both destroyers also offers some spinal firepower in form of single, heavy beam. What makes Nephelai unique is her swarm torpedo turrets with wide firing arcs, and pair of hangarbays. Nephelai is capable of defending itself against bomber attacks, with multiple AAAf beams scattered evenly across the hull and lots of other turrets as well. Certainly not the best shockjumper of quite limited durability, but still very effective against smaller targets. Five BGreen beams makes Nephelai a very potent duelist.