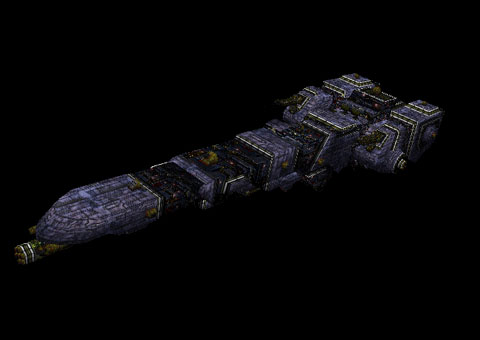 In initial releases of Blue Planet, the Orion Refit remained largely the same as Hamano's model. The main change, to match the Sanctuary being constructed during the Great War, was the replacement of all its weapons with blob and pulse turrets. Funnily enough, this still made the Sanctuary pretty well-equipped for what is essentially a giant transport, although it was doomed against modern-day ships. The Orion Refit received further modifications in later releases of Blue Planet, with the MjolnirBeam barrels replaced with mundane spokes, and the turret count changed and reduced to just 16 Terran Turrets, making the Orion Refit more befitting of its background as a sleeper ship hastily cobbled together from two Great War-era Orion destroyers. In its current iteration, the Orion Refit is essentially an FS1-era GTD Orion with an all-Terran Turret setup which, against the more advanced weaponry seen in Blue Planet continuity, makes it a gigantic sitting duck, with only its sheer hitpoints being a deterrent against ill-equipped fighters.