The Daedalus was developed by the GTVI as combat-efficient stealth fighter, with better armour and weaponry than the Ptah or Pegasus class. Unfortunately, the Stealth system is somewhat flawed, only giving full protection when the fighter is stationary and 'powered down' - making is unsuitable for covert insertion in 'hot' zones for recon. Nevertheless, the Daedalus' superb maneuverability and agility, coupled with it's steath capabilities, make it an excellent fighter for ambushes.

Daedalus is the most significant development so far of the Pegasus stealth fighter. For the first time, the GTVA has supplemented a viable offensive weapon with full stealth technology. The Daedalus is equipped with four gun mounts and two small missile banks. Combined with great flight performance, it has become the weapon of choice for covert missions. The few Daedalus wings currently in GTVA service are issued only to the best pilots.

The GTF Pegasus was renowned for its razor-thin targeting profile, superb handling, and its complete invisibility to sensors. It was also infamous for its pitiful armament and paper-thin defenses, which proved lethal if the fighter was ever discovered. The Pegasus only saw limited service with combat squadrons, primarily flying with SOC, performing rear-area reconnaissance and deniable ops. The Daedalus is Nankam's successor to the Pegasus design, incorporating additional primary and secondary hardpoints, as well as glide capability to reduce engine emissions. Unfortunately, Nankam could not improve the spacecraft's armor without sacrificing stealth, although improvements in shielding technology allow for stronger shields than its predecessor. Reports suggest the Daedalus has entered service with SOC squadrons, but no plans are in place to issue the Daedalus to line squadrons. 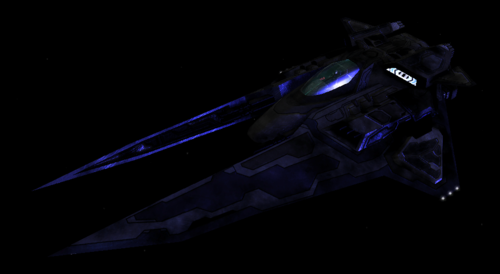 The GTF Daedalus as seen in Inferno: Nostos.

In Casualties of War, it's more like a Pegasus-Loki breed. It has four primary firing points, some missile capacity and stealth capabilities. Its biggest advantage over the Aurora is its compatibility with the Maxim. Unfortunately, that's just not good enough in comparison to the Aurora's six primary banks, better missile capacity and compatibility. A few of the missions play better with the Maxim, but all missions (where the Aurora is available) are beatable in an Aurora.