Difference between revisions of "GTF Ereshkigal" 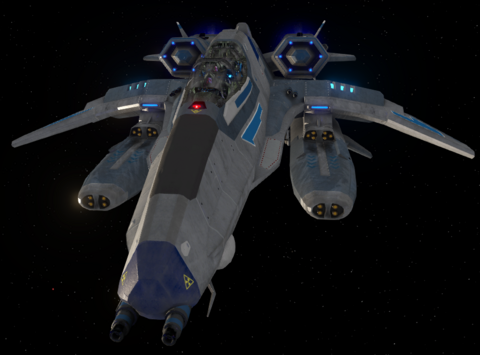 With RNI's Myrmidon an abject failure and the aging Perseus returning to its intended role of bomber intercept, the Admiralty saw a need for a new multirole combatant. Drawing on its experience with the Apollo and Hercules fighters, Han-Ronald produced the Ereshkigal spaceframe. A true generalist of a spacecraft, the Ereshkigal's weaknesses are precisely balanced with its strengths. Its limited primary hardpoints are tightly packed for optimal effect. Its reduced speed and maneuverability compared to dedicated dogfighters is offset by its slimmer profile and superior durability.The Ereshkigal, commonly referred to as the 'Eresh' by its pilots, has gained a reputation for reliability in any combat scenario, and is expected to serve as a supplemental fighter for years to come.

A solid all-around performer. What makes the Eresh stand out is its absolutely superb gun configuration. It only has four hardpoints (don't be fooled by the six on the actual model) but they are by far the best of any strikecraft since the Athena, except this one is actually meant to win dogfights.