Difference between revisions of "GTI Arcadia"

The GTI Arcadia is a Terran-designed installation. The Arcadia was known to be durable, but lacked proper self-defense capabilities, especially after the development of beam cannons.

Early Terran space stations were constructed much smaller, and were mostly used for Zero-G research purposes. Later on, with advancements in space construction technologies, stations grew bigger and bigger. When the first Arcadia-class station was commissioned, GTA decided to rename it to an Installation rather than a Space Station. Used for a variety of purposes, almost all major systems are home to at least one Installation, which is often used as the center of trade and communications. Home to scores of small ship, including repair vessels, fighters, and transports, an Arcadia class Installation is always a safe haven for a convoy of attack ships, returning from battle. Where the Orion is the symbol of Terran power, the Arcadia is the shining beacon of stability.

The GTI Arcadia is a multi-purpose installation that has served the Terran fleet since the days of the Great War. Almost every major star system is host to at least one Arcadia, which is often used as a center for trade and communications. Home to scores of small ships, including repair vessels, fighters, and transports, an Arcadia installation is always a hub of intrasystem and interstellar traffic. An Arcadia is not an easy target for hostile forces, as it combines the firepower of over 20 weapon turrets with the ability to launch up to ten wings of fighters from its fighterbay.

Arcadia is a region on the Peloponnesus peninsula, both in ancient and modern Greece. Arcadia, being a mountainous area, is a classical refuge. The word Arcadia also has some artistic (especially literary) meaning. 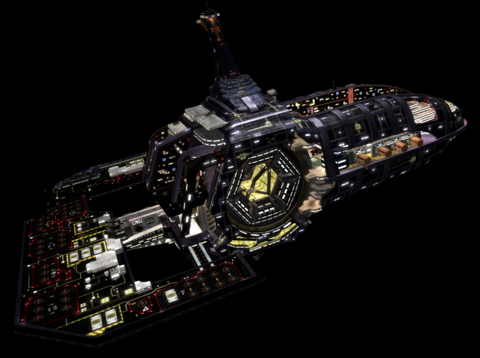 There is nothing tactically good about the Arcadia. It is armed only with FighterKillers and Terran Turrets, and only has two and a half squadrons of fighters compared to the Hecate's twelve and a half, and the Orion's eight. A GTC Leviathan can simply sit and bombard this installation, but it is after all, a civilian installation.

The Arcadia is the only proof in existence that sheer number of turrets does not constitute a good defense. The Arcadia has nearly twice as many turrets as the Orion, yet it can't defend itself.

A single corvette can wipe an Arcadia out without adequate fighter cover. A Deimos is the single largest threat to an Arcadia (discounting larger capital vessels) and will take this installation down in minutes. Not to mention, there are plenty of safe places for bombers to hide and deliver their payload.
Retrieved from "https://wiki.hard-light.net/index.php?title=GTI_Arcadia&oldid=40733"
Categories: