Difference between revisions of "GTSG Mjolnir"

The GTSG Mjolnir, also known as the Mjolnir Remote Beam Cannon (RBC), is an Allied Terran-designed gun emplacement. Brought into service near the end of the NTF Rebellion, the Mjolnir sports a single destroyer-grade beam cannon for attacking larger enemy vessels. For defense, the Mjolnir can be equipped with a bomber-issue shield system, although it has no defensive turrets and relatively thin armor plating as a deterrent should its shields fail.

The GTSG Mjolnir is the most advanced sentry gun device known. Vastly tougher and deadlier than the earlier Watchdog, Cerberus, and Alastor models, the Mjolnir is a danger to any hostile fighter or bomber that comes within range. Its two beam weapons and three missile banks enable it to take on multiple enemies simultaneously. Mjolnirs are also referred to as RBCs (remote beam cannons). They are used to help protect the most vital front-line Alliance installations.

In Norse terminology, it roughly means "to pulverize". Mjolnir refers to the legendary war hammer of Thor, made for him by the twin dwarves Sindri and Brokkr. 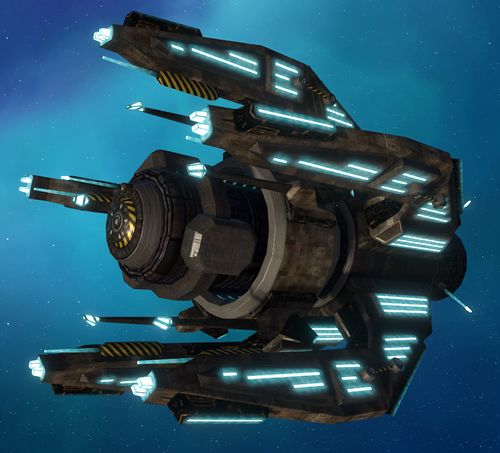 The GTSG Mjolnir in the latest MVPs

The Mjolnir mounts only one weapon, despite the tech description. That weapon is the single most deadly GTVA beam cannon you're ever going to find, however. Mjolnirs are very nice things to have on a blockade, but desperately vulnerable to fighter and bomber attack.

I think you only encounter them in one mission (the one where you have to destroy most of the rebel fleet) but they are excellent. As with the above, you have to protect them as they have no anti-fighter armament and really go down fast despite the 2.5-4.5k HP for a sentry. Their fairly small size and massive firepower leads one to wonder why the GTVA does not mount any of these on their warships.

Though these guns pack a wallop, they're quite vulnerable, both to fighter strafing and return fire from warships. In-game, be sure to keep an eye on threats in the area, or a blockade dependent on the presence of these guns will be over very quickly. As a mission designer, consider whether or not you want warships firing their beams back at Mjolnir platforms or not, since despite the cruiser flag in the tables, Mjolnirs are small enough to justify them being ignored by heavy beams (i.e. being flagged "beam-protected").

The tables indicate that the Mjolnir has shields, but neither the Retail nor the Media VP model has a shield mesh. If modders want their Mjolnirs to have shields, then they will have to give it the "surface shields" flag. In addition, you cannot directly point a Mjolnir at specific objects in FRED2 or fred2_open because its default orientation is facing upwards instead of forwards.

Biggest problem with the Mjolnir is their inability to alter the heading of their beam cannon after their first shot, presuming they're using the standard MjolnirBeam. The turret can't even rotate and is forced to rely specifically on it being effectively aimed at the target directly. Using the tracking version of the beam significantly impacts the damage output of the Mjolnir as a sentry gun, but will allow it to more effectively engage targets when used for node blockade duties.
Retrieved from "https://wiki.hard-light.net/index.php?title=GTSG_Mjolnir&oldid=63191"
Category: