The GTS Hygeia is a Terran-designed vessel. Its sole purpose is to be sent into a battlefield to rearm the missile banks and/or repair the subsystems of any small ship that requests for it. To this effect, it has a top speed of 70 m/s, which allows it to fly quickly into the heat of battle and dock with the target ship. The Hygeia's relatively high hull rating, given a ship of its size, also means that it can stand a slightly higher chance of surviving for extended periods on the battlefield than some fighters, although it has no self-defense capabilities. Because it carries a huge amount of missiles and/or warheads in its hold, the explosion of a Hygeia is significantly more damaging than most other ships of the same size. 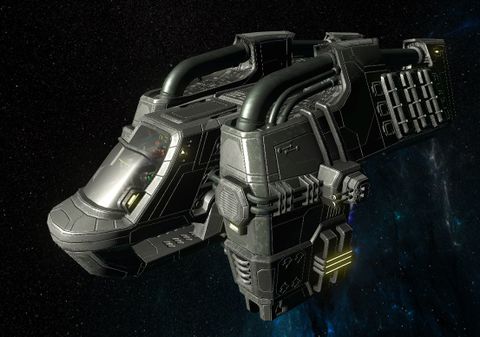 The GTS Hygeia is the fleet's newest Terran support ship. It is fast and maneuverable, a necessity when trying to dock with fighters in the heat of battle. Triton Dynamics designed the Hygeia class with huge cargo bays for munitions storage, plus the latest magnetic-stasis delivery system for quickly re-supplying combat craft with missiles and bombs. The Hygeia's repair facilities are driven by neural-net AI, for ultra-fast system diagnostics and repair. The high number of warheads carried by the Hygeia makes it a dangerous ship to be near when it blows up.

In Greek mythology, Hygeia was the goddess of health, cleanliness and sanitation.

History
Model by: Rampage and Nyctaeus
Textures by: Nyctaeus
Release thread: [1] on 25 July 2019

All support ships in both games are pretty much the same, they're pretty much sitting ducks so don't expect these things to make it through a firefight, and if they should explode, make it far away from you.

The Hygeia's destruction has no shockwave, meaning that you can be fairly close when it blows up safely; truly significant damage will only occur if it's in skin-skin contact or within about 25 meters. Beyond that your shields probably won't even notice.

This is actually worse than the Centaur, as it is not improved in any way and presents a much larger target profile, making it more likely to die.

Like with all the other support ships, you can still have them dock with you even while you're moving, as long you're not going any faster than 20m/s.

Oddly enough, this ship, along with others such as the Amazon drone, has shield hitpoints, but no shield mesh, making them effectively unshielded.

This ship is one of manifests of Volition's laziness or was prepared in hurry. LOD0 of retail Hygeia uses seven texture slots, and six of them use the same 'support01' texture. Each LOD follows the same scheme, so despite the fact that Hygeia uses only 5 unique textures, she has 20 texture slots.
Retrieved from "https://wiki.hard-light.net/index.php?title=GTS_Hygeia&oldid=61414"
Category: