Difference between revisions of "GVF Serapis" 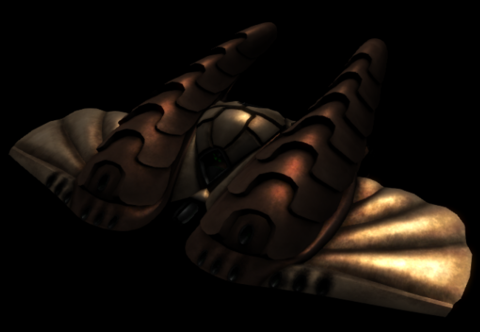 "Some Terran pilots who've been privileged enough to fly it claim to prefer it to any Terran fighter." This is because they're idiots. The Serapis is slower than the Horus, has weaker shields and armour, and is only marginally more manoueverable. Its only advantage is the extra missile capacity, but since you'll die before you can use them, this isn't much of an advantage. Whoever classed this as an "Advanced" interceptor is having a joke. And as for comparing it to Terran fighters...

The Horus is a far better interceptor than this thing. Intercept needs high speed, good manoeuvrability. While this is one of the most manoeuvrable fighters you will ever have access to in the game, it just doesn't have the speed to do intercept. One thing to note, however, is that in the right hands, it is a surprisingly capable dogfighter. But it is extremely fragile, to the point that you may want to reroute some power to shields. You really can't take more than a few hits. But overall I find it much more like the Ulysses than anything else. It's a supreme dogfighter like it, but it cannot stand prolonged combat, even less so than the Ulysses. However, it does have a second secondary (Giving it more versatility and a total capacity more than twice the size), and it does have a Maxim, which is a bit odd, but allows it an option when dealing with warships, and makes it good for hunting down transports, freighters and miners.

The Serapis can fly, but it's made out of tracing paper; I've seen a video where the front quadrant of a Serapis — at full power, by the way — was completely taken down by just one hit from a Shivan laser mounted on the rear of a Rakshasa (a second shot knocked the Serapis's hull integrity from 100% to 79%). It has a few advantages over the Horus, however, in that it can carry the Maxim, and that it lacks the inertia of the Horus while pitching. This is why I would rather use this ship for interception than the Horus.

It is worth mentioning that the Serapis has a higher energy output than anything short of an Ares or Mara, 70% more than a Perseus or Ulysses. The fast recharge and excellent handling make this very survivable if one takes being shot at seriously instead of shrugging it off and finishing the current target first (bad idea given the low shield capacity). I find it the ideal craft for destroying waves of fighters and taking cheap shots at capital ships with Maxims in between. If this was compatible with Kaysers (putting all that power to good use), I would prefer this over any Terran fighter.

I could never adapt to Vasudan ships. Their philosophy of having faster, weaker craft seems to plague even their heaviest bombers. Especially for the AI, maneuverability and speed doesn't seem to save them. The Perseus is by far a better craft, having nearly equal loadout and handling, equal primaries, and is even faster in both normal and afterburner speeds! Though, as mentioned above, the Serapis has much better energy recharge, that's not the biggest help if you have a number of enemies on you, which makes it hard to quickly take them out. The Perseus also can't carry Maxims, but given the plethora of other craft available, there's much better options than this.

Also note that the Serapis's primary placement is just better than that of the other light Vasudan fighters. Its higher accuracy may save some lives, but to be honest, it would indeed require more hitpoints. In fact, the firing points almost reflect the old Valkyrie's (two on the external wing mounts, two directly close together on the nose in an Y--XX--Y fashion, where X is mount 1 and Y is mount 2).
Retrieved from "https://wiki.hard-light.net/index.php?title=GVF_Serapis&oldid=40059"
Category: