Difference between revisions of "HEC Typhoon" 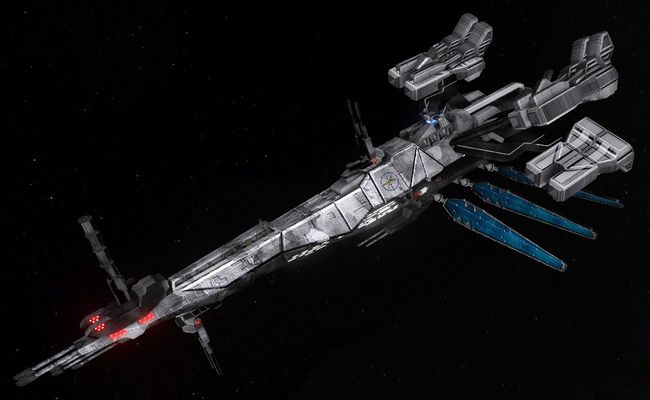 A notable deviation from Homeworld Empire traditions, the new Typhoon Cruiser line of vessels completely subverted the age old moniker of sheer firepower above all else in favor of flexibility. The Typhoon series of Cruisers don't win any brutality rewards, but it makes up for it thanks to its spacious hangar bay and agility. Quite possibly the biggest subversion of all would be the Typhoon's first use of the new Shield Fan technology. A new budding method to project a matter field to divert or stop projected energy weapons from hitting the hull rather than relying on sheer hull plating alone. Since the first Typhoon left the massive shipyards surrounding planet Homeworld itself, the cruisers have since replaced traditional Hurricane Heavy Cruisers in the role of command ships. A Typhoon is modestly armed with two twin barreled Proton cannons, a single large beam cannon turret, and an array of 6 forward beam weapons make for its main anti capital ship weapons. To deal with fighters it has a hump mounted array of rapid firing pulse cannons and several large high velocity shard cannons turrets to round out the anti fighter armament.