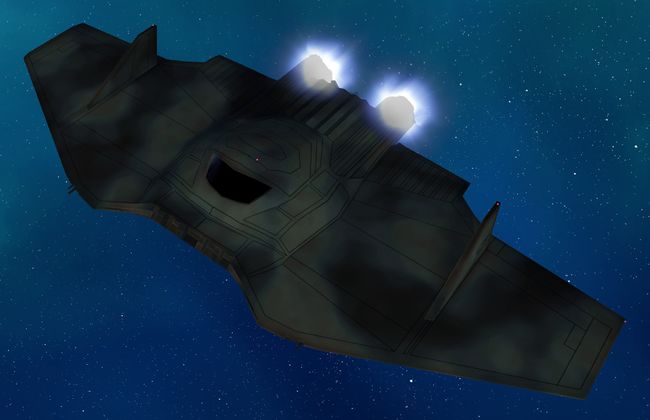 First introduced in 2710, the Hellcat II is one of the least-known or recognized fighter, in part because it was one of the last additions to the SLDF before the Amaris Civil War.

The craft is intended as a heavy aerospace scout, a task for which it carries a Beagle Active Probe, providing the ability to pierce normal ECM at much longer ranges than other scanning devices.

Though produced by the same company and bearing a similar name to the Hellcat, the Hellcat II possesses little or no resemblance to that older fighter, instead using a flying-wing pattern to minimize its emission footprint.

Originally protected by fifteen tons of standard armor, three tons was removed to improve the handling characteristics of what test pilots called a flying tank.

However, commanders felt that the weaker protection meant that the fighter would be unable to accomplish its primary mission.

The problem was solved with replacing the standard armor with Ferro-Aluminum which, though more expensive, provided superior protection for less weight, and improved heat dissipation.

The Hellcat II would only see full deployment by the 2750s, after which the civil war saw the destruction of its factories on Graham IV during General Kerensky's campaign to liberate the Terran Hegemony.

Most Hellcat IIs left with Kerensky in the Exodus Fleet, and with the creation of the Clans would occasionally serve in second-line formations.

The few left in the hands of the Great Houses would see their capabilities degrade as their advanced technology became lostech, though ComStar maintained secret stocks of Hellcat II fighters for use by its Com Guards.

The return of the Clans saw ComStar upgrade its Hellcat IIs to the superior 215 models, some of which would fall into the hands of the Word of Blake.

Hellcat HCT-212 - Armed with two Large Lasers, co-axed with a pair of Medium Lasers, with one set of each type of laser mounted in wings. The craft has 16 Heat Sinks. It does not have the Beagle mounted in it, and the craft is prone to overheating if all weaponry is fired at once