Description: The 203rd assists the GTVA Colossus in destroying the SJ Sathanas

Following an attempt at disarming at least two of the Sathanas' forward beam cannons by Alpha wing of the 203rd Scorpions, the Shivan juggernaut entered Capella to be confronted by the GTVA Colossus. If the Sathanas still has at least one main turret operational after Bearbaiting, the Sathanas also decimated an Allied fleet near the Capella node. Alpha is deployed, once again, to provide bomber support for the Colossus. 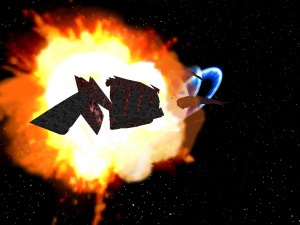 The Death of the Sathanas

You are not allowed to choose your loadout for this mission. You will be flying the GVB Bakha, armed with the GTW Mekhu HL-7, GTW Akheton SDG, a bank of GTM Trebuchets and a bank of Helios torpedoes.

This can be the easiest mission in the whole game if you performed well in the previous mission. If not, you still have work to do because the Sathanas can take out the Colossus even with one of its forward beam turrets operational. Fortunately, due to differences in timing, frames per second, maneuvering, etc., the Colossus is usually safe once you're down to one turret. If the flak guns are still operational, you may want to destroy them yourself, or order your wingmen to take them out for you.

The Basilisks can be really annoying, but you can usually take several out with Trebuchets at long range before you engage the Sathanas. Fortunately, there are only eight of them, as opposed to the many wings and waves of Shivan fighters in Bearbaiting, so when the second wave arrives, just order your wingmen to cover you. If you have gotten all four turrets, feel free to take them out yourself to get credit for the extra kills.

You can ensure you get the kill for the Sathanas by making sure you inflict more damage on it than any of your wingmen. You can do this by destroying AAA and flak turrets with your missiles and shooting down subsystems with your primaries. If your wingmen are busy with the Basilisks or if you've ordered them to depart, this should be pretty easy. After a 10-minute exchange of beam fire, the Sathanas throws in the sponge.

1This is the second smallest mission in terms of file size in the main campaign. The smallest is Training 6.