Difference between revisions of "If-then-else" 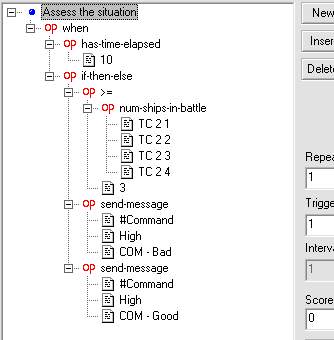 In this experimental mission, Omicron departs 20 seconds into the mission.

If-then-else is equivalent to a when X paired with a when not-X, for the same X. Thus if if-then-else appears in an event by itself, one of its branches will immediately fire. Therefore, this sexp will probably be more useful when chained after, or used as a subordinate to, a controlling sexp. In the example above, the destroyed-or-departed-delay sexp controls when if-then-else should check if its condition is true or not.

If you substitute destroyed-or-departed-delay with true, then the player's shield icon will flash at mission start. If you substitute it with (has-time-elapsed 15), then the player has 15 seconds to destroy Omicron. If he manages to kill Omicron in 15 seconds, then his ETS will flash. If not, his shield icon will. If the player kills Omicron in the 16th second, his ETS gauge will not flash.

A single if-then-else is sufficient to check an either/or duality. Omicron is either destroyed or not, there's nothing in between. By using SEXP embedding, if-then-else can be used to take multiple, not only two, possibilities into account for scenarios that have more than two logical outcomes.

In this example mission, we'll use percent-ships-destroyed on Beta, four fighters. If any of Beta jumps out or all are destroyed, Command will inform you how many of them were killed. Here are the logically possible outcomes:

In retail, you'd need a separate events for each message, accumulating to five events altogether. With embedded if-then-else, you need only one. The event looks like this:

The event will trigger if there is 0 of Beta in the mission ( = ( num-ships-in-wing "Beta" ) 0 ). This event would fire immediately if Beta weren't present on startup, so watch out if you want to apply this to a ship that arrives later. At the moment, we aren't interested in how many of Beta survived. We just want to tell FRED when to "look for survivors." Now comes the first "main" if-then-else, below which the rest are subordinated. If 100 percent of Beta is destroyed, Command will say "All destroyed." Now, if this scenario becomes false, so at least one survives, FRED will look below to see what to do if sending "All destroyed" is out of the question. The trick here is to use another if-then-else, not a send-message. If-then-else has two possible outcomes, while send message has one: it sends a message and that's it.

Get the example mission here. Destroying the container is Beta's departure cue. The No Traitor flag is set, so you can kill as many Beta as you want to test each possibility.