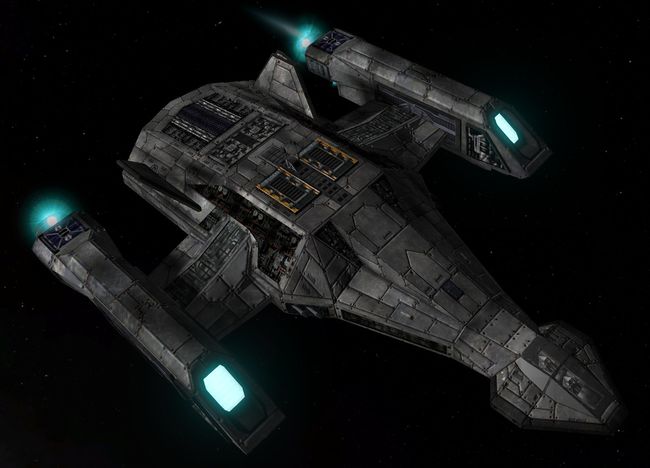 Probably the heaviest gunship ever produced in Sol. Bamiyan Development Corporation designed the Galaxy as a mobile torpedo launcher for Revenant swarm torpedoes. Although slower than the Elysium-class transports, Galaxy gunship is almost indestructible for Shivan fighters and the standard turrets of their capships. A very few prototypes were ever commissioned, and only a handful escaped Sol onboard the ORD Demetrius and ORD Anjaneya. After the Exodus, sluggish Galaxy bombers, originally designed to strike huge Federate installations and capital ships, turned out to be unpractical against swarms of small Shivan warships. For that reason Galaxies were stripped of some of their torpedo racks and compensated with additional primary banks. Reclassified as Gunships, Galaxy-class gunship became heavy escort craft filling the gap between a fighter and a cruiser. Most of them were assigned to the Escort Fleet and stations in the most vulnerable Colony Fleet staging areas. Galaxy pilots are often have the callsign Guardian Angels.