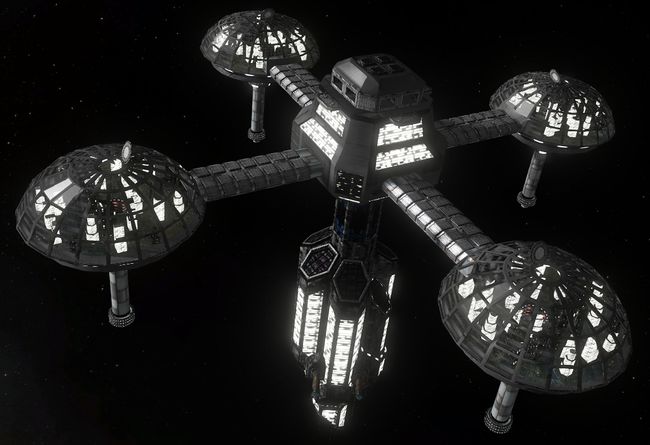 This huge modular installation was designed at the beginning of Terran colonization of the Outer Rim, long before the formation of the Syndicate. It was intended to provide a living habitat for up to 700,000 residents but also serve as a logistics and trade center as well as a base for long range expeditions and mining operations. Sky Gardens were often the first Terran bases constructed in a newly colonized sector – initially lonely islands among the cold vastness of space – then eventually surrounded by a network of colonies, mines, refineries and supply depots. Because of their enormous logistical capacity, they usually remained political, trade and financial centers for the surrounding areas even after the majority of the population and industry moved to other space stations and planetary colonies.

During the Martian War, Sky Garden installations were targets of EFN suicide attacks on their strategic spaceports and supply depots. The most infamous attack was the destruction of the ORI Heaven’s Gate, a Sky Garden-class installation in high orbit over Neptune, in June 2351. Later, during the Shivan Invasion of Sol, the Sky Gardens became death traps for everyone aboard when they were attacked by Shivan warships. The ORI City of the Sun was the only Sky Garden installation to manage even a partial evacuation of its population to the ORCo Abraham before being destroyed by a Shivan juggernaut.