Welcome to the FreeSpace Multiplayer Portal. This section is dedicated to providing guides on how to set up, play, host, and enjoy multiplayer games, as well as useful information about the multiplayer community such as squadrons, codes of conduct, and the like. 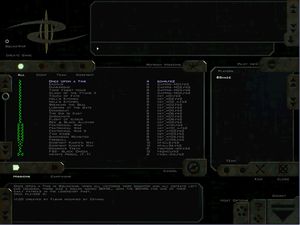 Currently, the FreeSpace Open engine supports multiplayer games with up to 12 human participants as well as any number of AI players. Play can be both cooperative and head-to-head, and can consist of anything from single mission slugfests up to full-length cooperative campaigns.

All games are currently hosted by one of their participants. The host chooses the mission (see image to the left), and has the power to kick players, set privileges, and the like.

The retail release of FreeSpace 2 in 1999 included a standalone server option which was later broken by various changes made by the SCP. Recently, a lot of work has been done to correct this, and on current builds the standalone server will work when run with retail data. Work is still progressing on making it compatible with the new data formats introduced by the Source Code Project.

There are two several ways of playing online games using FSO. You can also play the game on LAN.:

Details of setting up FSO to use either of these two options are explained in the getting started guide.

Now save the file. In the FS2 launcher, set the multiplayer connection to LAN and leave the Force IP and Force Port fields blank. You can enable "Allow in-game joining" in the Features/Experimental tab. Run Freespace 2.

In FreeSpace 2, create a multiplayer pilot. Then go into Options and select the Multi tab. Enable TCP, and /Multidata. Disable PXO. Do not set any IPs. Apply the changes. Go back to lobby and click on Create Game and set up a new server. Make sure the firewall on your LAN is not blocking the connection to your LAN server.

It is possible to use mods and play custom missions using FSO. Mods will need to be distributed to all participating players in advance, but missions will be automatically distributed if any participants are missing them.

When playing on FS2NetD, note that while mods and custom missions are allowed, stats will not be saved for games that use them. Only games using validated missions and data are counted. For IP games (where stats are not saved anyway) there are no such considerations.

A package containing all currently validated multiplayer missions for FreeSpace 2 is available from the downloads section below. A voice pack for those missions is also available. To use them, the best way is to place them in a separate directory and select that as a mod from the launcher.

Do not place them in the mediaVPs directory if you intend to play for stats, as the current mediaVPs are not validated.