Difference between revisions of "Shrouding the Light" 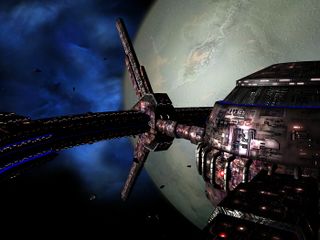 A PVI Karnak in the prequel, Shrouding the Light: Origins. 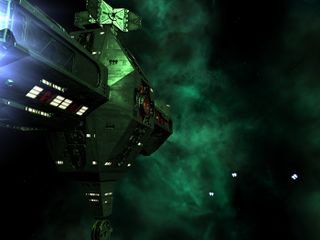 A Fenris on patrol in Deneb.

Status: Released by Blaise Russel in 2004

A year has passed since the destruction of the Lucifer and the flight of the Shivan armada. In the year 2336, the Terran and Vasudan peoples attempt to reclaim their former empires and piece together their shattered lives. However, dissidents and splinter groups from within jeopardise their hopes of peace - fighting for independence or against hated alien foes. In the midst of all this turmoil, you are transferred, from the safety of the 1st Battlegroup of Vasuda to the 13th Battlegroup's PVD Guardian and the troubled hotspot of Deneb...

Shrouding the Light is probably the campaign that cemented Blaise Russel's reputation as the master of FreeSpace campaign design, at least until Ransom Arceihn came along with Transcend the next year. Even then, StL is well worth the time to play it, particularly after being voiced. Shrouding the Light turns in good performances in every category, resulting in a campaign more than the sum of its parts and a superb overall experience. Ngtm1r 15:54, 14 June 2008 (CDT)