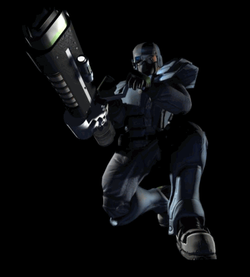 You want a piece of me, boy?

Space marines are Terrans outfitted for combat in close quarters environments, such as the interior of enemy ships. They are commonly deployed in capture operations, in which case they are usually delivered to their targets via transports. Space marines are presumably stationed inside every large GTA/GTVA warship, since they are present in the Galatea, the Bastion, and the Aquitaine. The Vasudans are also known to operate their own marine corps.

Space marines do not wear a space suit. They are seen equipped with body armor and some sort of breathing apparatus. One eye is outfitted with what is assumed to be an ocular targeting device. They are also known to have magnetic boots for operations in zero-gravity environments. Given that parts of the body are fully exposed, they presumably do not operate in vacuum with this equipment. Space marines have been seen armed with automatic projectile weapons and grenade launchers.

The only direct depiction of space marines in close-quarters combat is the Hallfight cutscene, which portrayed the attempted capture of a Shivan Azrael-class transport in the Antares system. Marines are also seen in the main halls of Terran ships, presumably acting as a ship's security detail.

Other canon references to marines include a FreeSpace 1 multiplayer mission where the player is sent to intercept a Hammer of Light marine convoy. Neo-Terran Front marine transports also make an appearance in the FreeSpace 2 multiplayer mission Rebel Intercept. In the debriefing of Surrender, Belisarius!, it is mentioned that 600,000 ground troops were deployed to retake control of Cygnus Prime. It is highly probable that these were ground troops were marines, although it is possible they were part of a land-based army.

This article is a stub. You can help the FreeSpace Wiki by expanding it.
Retrieved from "https://wiki.hard-light.net/index.php?title=Space_marine&oldid=36043"
Categories: