From FreeSpace Wiki
Revision as of 09:20, 14 May 2011 by Snail (talk | contribs) (the movement you need is on your shoulder)
(diff) ← Older revision | Latest revision (diff) | Newer revision → (diff)
Jump to: navigation, search

Altair, an example of a planetary system.

The planets of the Capella system.

Star systems, commonly referred to simply as systems, consist of various celestial objects orbiting a star. Star systems may also be host to one or more planets, in which case they may be referred to as planetary systems.

Prior to the development of subspace travel, space-faring species such as the Terrans and Vasudans were unable to travel outside of their home systems (Sol and Vasuda respectively) due to the immense distances between stars. With the development of subspace travel, various races were able to journey to other systems in a comparatively short space of time. Without subspace, it would take an inordinately long span of time to travel to other systems, as such distances would take years to traverse, even at light speed.

Certain systems contain planets, which harbor valuable resources, such as minerals or deuterium gas for fueling fusion reactors. Some planets are habitable, enabling the creation of planetary settlements. This has made some star systems extremely prominent, such as Capella; others, however, are of less use, such as Gamma Draconis, which possesses no planets or moons.

Star systems visited by the Terrans and Vasudans usually have at least one point where intersystem subspace travel is possible. These points are known as jump nodes. The destruction of all jump nodes leading to a system will prevent any subspace travel to or from that system, as was the case with Sol and, ultimately, Capella.

Subspace travel within a system is also possible via intrasystem jumps, which any ship equipped with a subspace drive is capable of. Because the presence of a gravitational field is required to make an intrasystem jump, it is not possible to travel outside of the boundaries of a system via subspace without the use of a jump node.

During the Second Shivan Incursion, a notable star system, Capella, was destroyed by a supernova triggered by a subspace weapon wielded by the Shivan Sathanas juggernaut fleet. The purpose of this action, and the means by which it was carried out, remain unknown.

Nebulae are vast clouds of interstellar dust which play an important role in the formation of star systems. Although they may not contain any stars or planets, they are also referred to as systems. 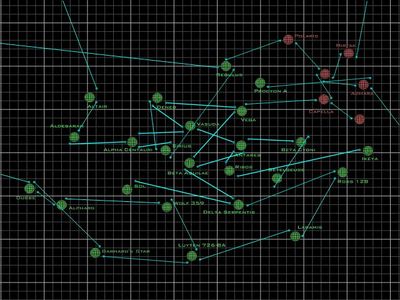 A node map showing the jump nodes linking the systems of the GTA. The distances shown are not representative of actual physical orientation.