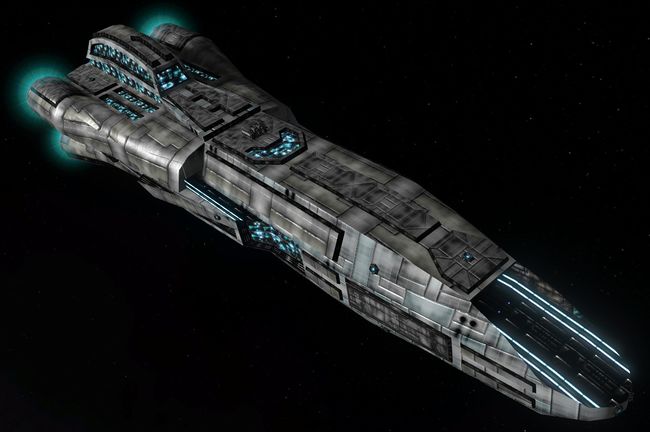 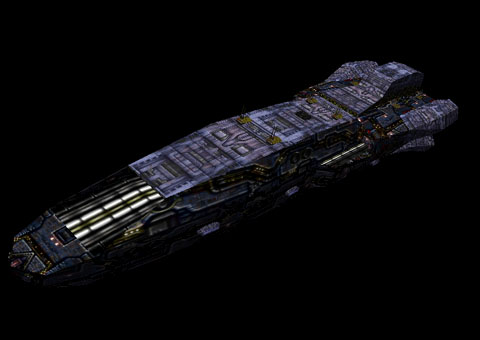 What looks like a small, additional hangarbays located in the middle of long broadsides of the ship is just a decoration. The fake hangarbays are not big enough for majority of FS strikecraft classes, and they are covered by invisible walls anyway. Only front and rear hangars are functional. Avoid deploying strikecraft from the carrier during intense maneuvers, as the exiting craft will crush on the wall inside.

This ship is usually armed with tons of blob turrets. I find it quite dangerous opponent for unshielded craft. It comes with impressive armament in both Twist of Fate and Unification War, but in Exile majority of turrets got removed. Exile modpack armed this ship with pair of spinal railgun cannons, and while it has double the spinal firepower of ORC Amalthea, it's the same railgun that must appear en-masse on multi-barreled turrets to be truly effective. Syr Darya is terrible attacker, and it's even worse at defending itself against enemy fighters and bombers.

The first released version of the HTL was known from collision errors caused by infamous Collada exporter for 3DS MAX. You can distinguish buggy versions by long, dark, unnatural shadow cast on the broadsides. It got reconvered by Mjn.Mixael to adress this issue, and re-released by Nyctaeus. Nyx's version has identical turret layout as Syr Darya from Exile.