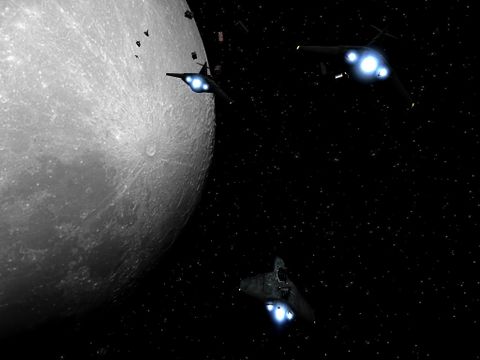 The Terran-Vasudan War Project (commonly abbreviated to TVWP) is a large-scale conversion project for FreeSpace 2, aiming to create a series of campaigns set during the times before FreeSpace 1’s story, most notably the 14-year war between the Terrans and Vasudans for which the project is named. TVWP features several major modifications to the game (including changes to basic game mechanics) and a story that combines canonical information with several new elements from the team themselves.

At of time of writing, the project has released two demos to the public, each containing an act from the first campaign “The Unification War”, (act I on Christmas day 2007, Act II on the 13th June 2010). It is expected that the final third act of this campaign will be released soon.

The Storyline of the project is separated into several chronologically ordered campaigns (originally seven, though this may shift as production continues) which will focus on key moments of the period (such as the Terran discovery of Jump nodes, first contact with the Vasudans, and major battles such as the Vega Engagement and Operation Thresher), with the player’s avatar pilot likely changing between campaigns.

The first campaign, which all public-domain material and the two released demos focus on, is set in 2313, prior to the GTA’s formation and discovery of the Vasudans, and documents a pilot in the Lunar Republic during the Unification War; a period of brutal civil strife between Terran colonies in the Sol system.

The TVWP will contain a wide variety of new assets and game modifications, some of which make use of features implemented by the Source Code Project team. Among of the most notable changes are the modifications made to how fighters and bombers operate; turning is more sluggish, and weapons and afterburner have limited resources before they run out, creating a unique challenge for the player in the short and brutal battles of the era. New ships and station both help and hinder the player, ranging (in the first campaign) from the numerous Shrike interceptor to the immense Reliant destroyer. All content at this time focuses on the Terrans, though the Vasudans upon their appearance will also feature new, pre-FS1 technology.

As the campaigns proceed, the ships stations and weapons available to the player and his opponents will change and evolve from the Unification war weaponry, until finally the player is making use of FS1-era equipment such as the Apollo and ML-16.

Acts I and II demo release