Difference between revisions of "The McCarthy trials" 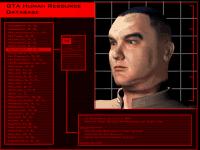 The McCarthy trials were the well publicized trials of Lieutenant Alexander McCarthy regarding his part in the attempted sale of the plans for the GTW Avenger to the Vasudans during the Terran-Vasudan War, immediately before the commencement of the Great War against the Shivans.

The trials apparently became quite famous, and were studied in Galactic Terran-Vasudan Alliance schools by 2367. The fact the trials are known to Terrans outside of Sol exacts us to assume they either took place in Sol during the Great War, before the collapse of the node, or that McCarthy was held, and eventually tried, outside of Sol after the node collapsed. The outcome of the trials is not known, though questions were likely raised in regards to acting against the Galactic Terran Alliance in the interests of the Terran people.