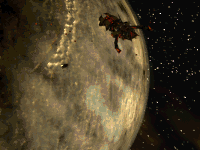 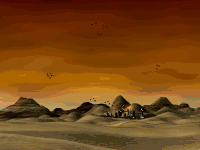 Vasuda Prime is the fourth planet in the Vasuda system, and was the desert homeworld of the Vasudans up until the events of the Great War, when the SD Lucifer bombarded the planet with its flux beam cannons for thirteen hours straight. Wiped clean of life, Vasuda Prime was rendered almost completely uninhabitable, which led to Aldebaran becoming the seat of the post-Great War Vasudan government. The Apsu-Hek was a creature that once inhabited Vasuda, but is now believed to be extinct.

According to Vasudan legend, an ancient race visited Vasuda Prime at the time Vasudan civilization was in its infancy, and this mysterious race helped Vasudans develop into a technologically advanced species.