In Blue Planet continuity, the Vishnans are a species the GTVA 14th Battlegroup first encountered directly while holding off a massive Shivan fleet near the other side of the N362 Knossos. The Vishnans are the second alien species encountered by the GTVA to demonstrate beam-capable warships. In general, Vishnan beam weapons out-damage and out-range their Shivan counterparts, let alone any beam the GTVA has ever created. However, Vishnan beam weapons have fairly lengthy recharge periods, with their anti-warship beams topping out at 25 seconds. 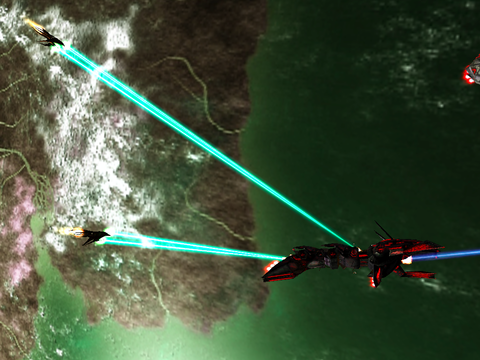 Two Vishnan Arbiters attack the SD Lucifer from behind with their primary beam cannons, with additional firepower coming from the GTD Orestes off-screen.

Vishnan beam weapons, like those of the Alliance and the Shivans, are relativistic plasma weapons. Unlike their Shivan and Alliance counterparts, Vishnan beams use a strip of gravitationally altered space-time, rather than a magnetic bottle, to guide the beam to its target. Gravity is a significantly less powerful force than electromagnetism, so the power requirements should be enormous and the efficiency reduced, but Vishnan beam weapons nonetheless outperform our own. Hasty examination of Vishnan warship debris suggests that they lack internal heatsinks. Scientists hypothesize that the Vishnans may sink heat through standing subspace gates. Although Vishnan beam weapons are powerful and frequently outperform Shivan equivalents, they do not seem capable of the extreme scalability that allows the Shivans to generate weapons like the Sathanas juggernaut's main guns.

The strongest of the lot, the LRABeam, has the second-greatest effective range behind the canon Shivan Super Laser (if you count that as a beam) and does more damage per pulse than even the BFRed. However, it loses out significantly on the reload time, so it only does a bit more sustained damage than the LRed. Exacerbating this problem is the fact that the Vishnan fleet as we know it lacks diversity versus their Shivan counterparts, so the LRABeam and BABeam are only seen on Vishnan Sacred Keepers and the Vishnan Preserver, which rarely take on other warships on their own. The main Vishnan ship class doing much of the anti-capship work, the Vishnan Arbiter, comes with 4 SABeams; each do only slightly more than half the sustained damage of a single BGreen, so the Arbiter's head-on pass is just about as deadly as an Orion's broadside. The ABeamTiny, seen only on the Vishnan Protector, is comparable to the SRed both in terms of sustained damage and damage dealt per pulse, making a Protector resemble a Cain in that regard. As for the Vishnan AAA, it has a 300 m range advantage over the AAAf/h and fires slightly quicker, making it akin to a slightly better AAAf/h.
Retrieved from "https://wiki.hard-light.net/index.php?title=Vishnan_Beam_Weapons&oldid=46237"
Categories: