Difference between revisions of "Volition" 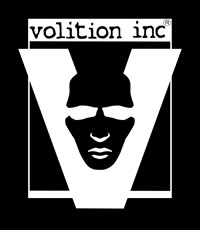 Volition, Inc. is the developer and publisher of the FreeSpace series. Volition is usually referred to simply as V or [V] by fans. It was one of two companies formed from the splitting of Parallax Software.

Parallax Software was founded by Matt Toschlog and Mike Kulas in 1993. It was best known for being the developer and publisher of the Descent series of video games, starting with Descent in 1995, and Descent II a year later. In 1997, Parallax split into two companies, each headed by one of Parallax's co-founders. The first company, Outrage Entertainment, was headed by Matt Toschlog and based at Ann Arbor, Michigan, while the second, Volition, Inc., was headed by Mike Kulas and based in Champaign, Illinois.

Volition's first project after the split was Descent: FreeSpace – The Great War. It was released in 1998 and followed up by FreeSpace 2 in 1999. In 2000, the company was acquired by THQ. After the bankruptcy of THQ, Koch Media acquired Volition in 2013[1].

Since its acquisition by THQ, Volition has worked on and released several noteworthy game titles, including the Summoner, Red Faction and Saints Row series.