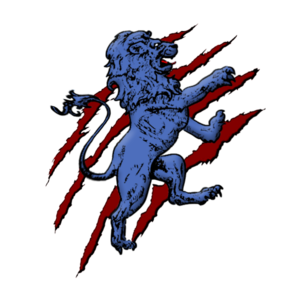 The Blue Lions logo by MjnMixael

The 70th Blue Lions were an elite squadron that served during the Second Shivan Incursion. They usually flew the GTF Erinyes and were among the few squadrons to have permission to use the UD-8 Kayser and the Infyrno warhead.

When the number of Shivan juggernauts entering Capella became clear, the Blue Lions assisted the evacuation of the 3rd Fleet headquarters at Capella. The pilots performed admirably and saved both evacuation transport and the GTD Messana. The station was self-destructed after all personnel were taken on board the Messana.

Following that engagement, the evacuation of the Capella system continued despite heavy Shivan interference. The Blue Lions escorted several civilian vessels, among them a medical ship, out of the combat zone. The mission was successful.

There was little time to complete the evacuation; the GTVA had to keep the jump nodes leading outside safe. The GTVA Colossus and the remnants of the 3rd Fleet blockaded the jump node to Gamma Draconis to draw the Shivans away from the Epsilon Pegasi and Vega nodes. It is in this mission that the GTVA Colossus was destroyed despite all efforts on the part of the 70th Blue Lions. With the Colossus already damaged and with consecutive attacks from a Shivan Ravana-class destroyer and then a Sathanas juggernaut, there was nothing the Blue Lions could have done.

It is no wonder this elite squadron received the task to defend the GTD Bastion so that the destroyer could seal off the jump node to Epsilon Pegasi. The mission succeeded, but when Capella became a supernova, only a small number of pilots escaped, and some of them were of the 70th Blue Lions.