The HTL GTFf Saphah in the BWO Demo 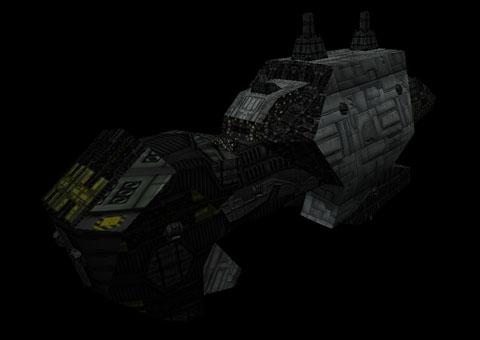 The original GTFf Saphah in Derelict

A new class of Frigate based upon the NTF's Iceni design and built by GTVI, the Saphah retains the heavy armour of it's forebear, coupled with a modified turret loadout that affords better protection against fighter and bomber attack than the Iceni had without sacrificing anti-capital ship punch. The consequence of this is slightly reduced armour and speed compared to the Iceni, but the Saphah remains a powerful vessel. Rumours that major security breaches during the NTF conflict that led to the Iceni's escape were engineered in order to gather data on the vessel for Project Saphah have been strenuously denied by the heads of GTVI.

During the NTF conflict the Iceni was proven on several occasions to be more than a match for GTVA vessels of similar size, such as the Deimos and the Sobek. Needless to say, such destructive capacity on a relatively small frame was sought after by the GTVA during the NTF conflict, and particularly after the devastating encounter with the Shivans in Capella. GTVI officials deny, however, that major security breaches leading to the Iceni's escape were engineered in order to gather information about the vessel. The Saphah was the vessel that emerged from GTVI's labs early in 2372. Retaining the heavy armour of its forebear, the Saphah also benefited from a reconfigured turret layout. This gives the frigate superior anti-fighter cover without sacrificing its four heavy beam cannons. This additional firepower places strain upon the Saphah's power core, leading to slightly reduced engine speed. Nevertheless, the Saphah remains a fearsome vessel, vastly more powerful than anything of similar size. The second production run of this vessel is now being distributed among Alliance fleets, but it is still GTVI who staff and command most of these frigates.

The GTFf Saphah is a reskin and table hack of the Iceni. Unlike the Hydra however the Saphah is considerably more involved table-wise, and makes fairly large adjustments to the Iceni's armament, rationalizing the layout. It is an anti-capital corvette, in essence, well-equipped to take on enemy cruisers or corvettes, and able to give hostile destroyers serious problems. Two Saphahs appeared in Derelict, but only one was named, the GTA Cypher.

The second Saphah that appeared in Derelict was called the Enigma, and was apparently part of a GTVI conspiracy. The motives of this rogue faction are not known, but they are expected to be explored further in Blackwater Operations. It is to be noted that the Enigma was somehow cloaked from sensors.