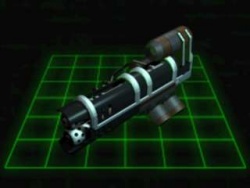 Primary weapons serve as the main armament on fighters and bombers.

Accuracy completely depends on the skill of the pilot, not on an Artificial Intelligence/Computerized Fire Control system of any sort. Size of the craft involved (and related power generation capacity) is the greatest determining factor for determining the number and type of primary weapons to be mounted.

The SCP has implemented a way to use flak guns and beam weapons instead of standard lasers on fighters and bombers.

This article is a stub. You can help the FreeSpace Wiki by expanding it.
Retrieved from "https://wiki.hard-light.net/index.php?title=Primary_weapon&oldid=34704"
Categories: