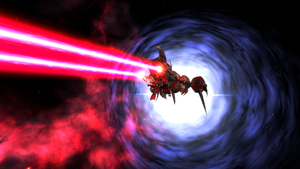 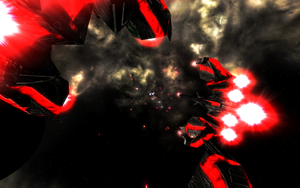 Seraphim bombers attempt to hunt down a Pegasus stealth fighter.

Two GTI officers interrogate a pilot about his recent experiences, beginning with the awakening and mysterious actions of the destroyer Vassago, passing through NTF experiments with ETAK, and culminating in a daring operation at a derelict under-construction installation. The truth behind it all lies within the seemingly trauma stricken memories of the pilot, whether he likes it or not.

There are 7 spoons hidden throughout the campaign. Only the first and last missions do not have them. Their exact locations are up to you to find and scan, but most are in plain view. Some are hidden and one is probably pretty mean. The FREDder has faith in you to not look in FRED and cheat. If you found at least one spoon, the final debrief recommendation will give you a tally of the total you found. 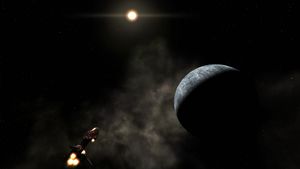 This is a sort of redoing of my very first campaign, Shadows of Kraken. In that campaign, a Ravana destroyer, the Kraken, comes out of nowhere and the GTVA is able to capture it. What ensues is marine captains hijacking the Kraken, and admirals going rogue, starting some sort of new rebellion while talking in nothing but vague statements. It ends with you helping a Shivan cruiser get to a Knossos. On the surface, it looks like all I took was a Ravana from that story, but if you play both you can see their similarities better (that is if you can't stop laughing at SoK). I foresaw how bad this campaign was and the whole thing ended with an SOC agent telling you nothing you saw just happened. Rightly so.

You might ask, "why did you use classical music for this campaign?" I didn't intend to in the beginning, I just started to use Rachmaninov's Piano Concerto No. 2 as the music in the opening cutscene. It got a nice reaction when I showed it off. So I decided to see if I could get away with using nothing but classical music. I loved the results when I started using the music as a guide to build the mission off of. Big climax in the music equals big climax in the mission. I tried my best to inject the energy from the music into the mission. I tried to keep the music thematically consistent so it never felt out of place. You'd be surprised how classical music can clash with itself. This is why nearly all the music is composed by Rachmaninov (with other pieces by other Russians and even a Norwegian!). This isn't some Shivans = Soviets thing (never mind most of this music was written before then), but Russian music tends to be quite brooding, emotional and very dramatic. Which is exactly what I was going for. Imagine that.

Also if you are interested in the recordings for Piano Concerto No.2 and 3, this is the CD to buy.

"One of the most compelling, atmospheric, artistic mods the community has seen, delivered by an auteur and a peerless FREDder. Like the titular dirge, it is both beautiful and funereal - a desaturated journey into the most compelling and unearthly parts of the FreeSpace universe. There are moments in this campaign that will shock, and others - more disturbing yet - that will chill you with their unsettling, eerie familiarity." - General Battuta

"I'm still trying to wrap my head around everything I just saw, but what I do know is that this was a masterstroke. There were elements in here that I didn't even know the engine was capable of handling. The soundtrack utilization was nothing short of genius, and the introduction of that style added an atmosphere to the campaign that I've never experienced before. The missions were insanely varied for such a short campaign, often challenging but never outright unfair." - Mongoose