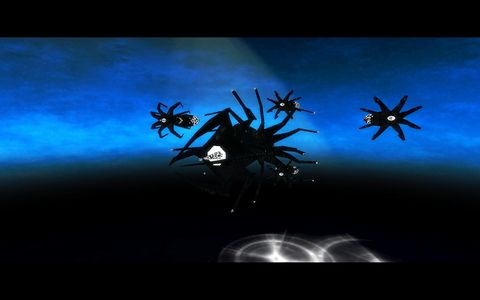 Aesdherian vessels in the upper reaches of their homeworld's atmosphere

The Aesdherians are a non-canon race featured in Ancient-Shivan War Act I.

Prior to their fateful war with the Ancients, the Aesdherians fought and defeated another alien race. The war was described as bloody, and it was during this war that the Aesdherians developed their beam technology and enhanced their armors. They had little time to savor their victory, however, as the Ancients attacked them, without warning and with a clear intent to kill. (Source)

It is implied that the Ancients were playing with them, hoping that the Aesdherians would prove a worthy adversary. Since the Aesdherians showed little sign of technological improvement, the Core decreed that they were to be exterminated. The Sopul Fleet, led by Fleetmaster Im'Halus aboard the carrier Akrotiri, launched a final offensive on the Aesdherians and crushed their navy in the Battle of Aesdher. Aesdher IV, their homeworld, was subsequently bombarded and the Aesdherian race was eventually exterminated.

Ancient intelligence believed that the Aesdherians had developed rapidly, and successfully deduced that they already fought and won a war against another spacefaring race. Aesdherian fighters were also equipped with shielding, unlike the Ancients. However, their shields were insufficient to effectively counter Ancient weapons, and Aesdherian beam weapons posed only a minimal threat to Ancient warship hulls.

Techroom data in Blue Planet makes veiled reference to the discovery of the remains of a civilization destroyed by the Ancients, which could be taken as a tribute to the Aesdherians and Ancient-Shivan War.