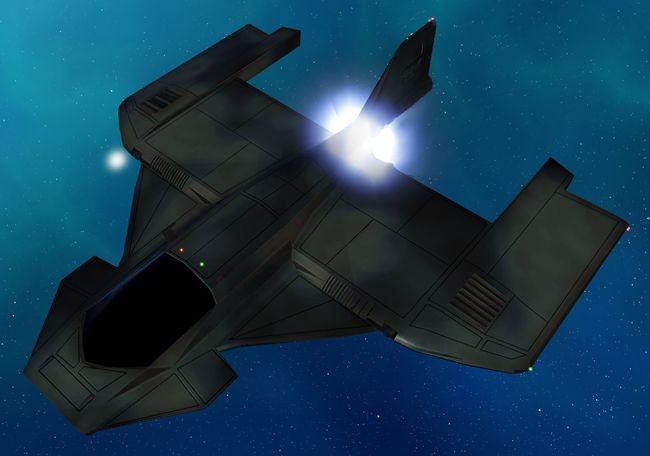 Originally designed for the Star League, the Cheetah is a light support or reconnaissance Aerospace Fighter. Boasting a maximum acceleration of nine gravities and a safe acceleration of six, the Cheetah is among the fastest and agile fighters in existence and features a good weapons load-out for its size. This speed is necessary, as with only three tons of armor a solid hit by a heavy laser or missile volley can cause serious trouble. Four tons of fuel provide adequate range, though the idea that the GM 250-a power plant consumes more fuel than usual is just an old wives' tale. Another urban legend that the the fighter's agility suffers when operating in an atmosphere is also false, though its extreme accelerations are physically punishing on its pilot.

The Cheetah was in continuous production from its introduction up until the downfall of the Star League, when the Free Worlds League copied the design and retooled several of their factories to continue producing them. It since became the standard light fighter of the Free Worlds League Military, appearing in nearly every FWLM aero formation. It has performed well in many roles especially escorting DropShips, with many assault squadrons using Cheetahs for long-range patrols and fast-courier runs.

Well armed for a light aerospace fighter, the F-10 Cheetah has a Starflash I Small Laser in the nose and a Starflash II Medium Laser in each wing. The lasers give the Cheetah a heavy punch for supporting other fighters or ground troops.

F-11 This upgraded variant produced by House Marik, the F-11 eventually became the fighter's standard production model, correcting many of the flaws in the original. It uses a GM 250-a XL Engine and change the armor to Ferro-Aluminum, increasing the amount of armor protection by half. The lasers are also changed to a Small Pulse Laser and two Medium Pulse Lasers, while two tons of additional fuel gives it longer legs.

F-12-S The Cheetah-S removes the medium lasers and one ton of fuel, to be replaced by an SRM-4 pack and one ton of ammo. With the reduced range this variant is used primarily as a defensive craft for installations or Dropships.