The following is simply copied from Selectah's talk page until I get this cleaned up.

Ya, you're right; the Alphas -- especially Alpha II, dated 12/04/97, almost 11 years ago -- were shipped to various testers and magazine editors, so that they could get a preview of what's coming. Plus it allowed them to hype the game no end. Thing is, there was a truckload of interesting things in the Alpha(s) -- of which there was a total of two, I don't have a release date for Alpha I (ironic name, no?) -- stuff that didn't survive at all or was changed to the point of unrecognizability. Things such as unique ships (the shivan cruiser Caldera, and -- yes -- the Juggernath, which was not the GTC Orff as is usually believed, but a unique ship from the second Alpha mission, etc), a completely different HUD in the first Alpha (with shield integrity as exact percentage instead of GFX, etc), unique weaponry (some of which are still present in the screenies on Volition's site -- look for the Angelfire missile, for instance, check for stats below), a completely different pilot stat screen (with your current fleet affiliation on display and totally different pilot appearance graphics), different POF models and backgrounds (YES!! PLANETS!!), et cetera. 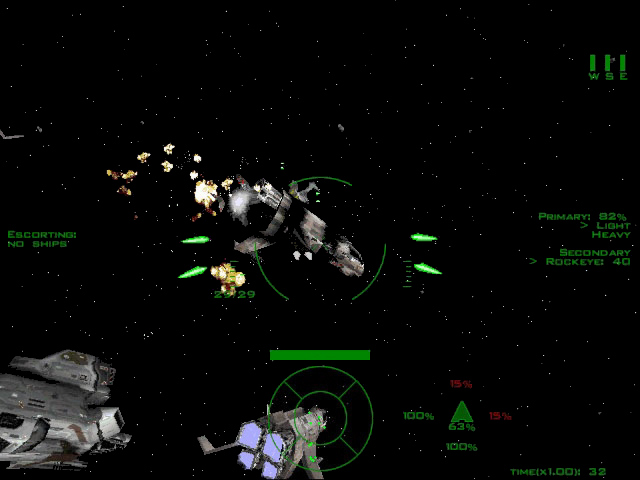 Early version of the HUD, from FreeSpace Alpha. 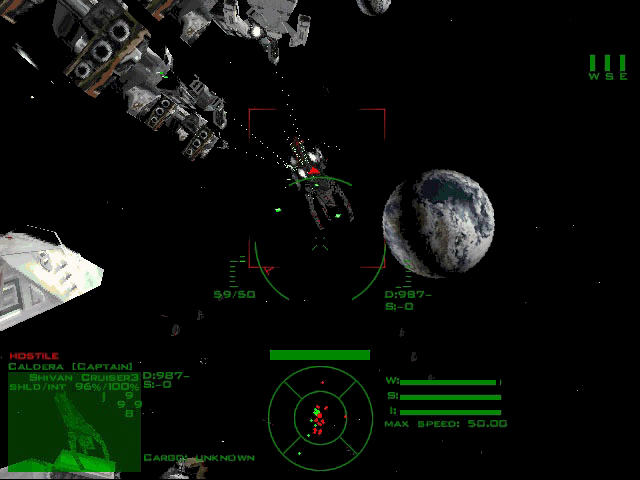 The Holy Grail™ for me, though, would be the unique missions of the Alphas. There were three missions in the Alpha versions, two of which are the ones' we know from the FreeSpace 1 Demo. The third Alpha-only mission -- the second in the Alpha "campaign" -- is the most interesting of the bunch. This is the fabled mission where you are ordered to escort the lone Juggernath, a Fenris class cruiser. The mission contains a lot of unique dialogue, dialogue which explains the sentiments regarding the newly founded Vasudan/Terran alliance and deepens the storyline, highlighting the still present animosity towards the Vasudans. A line from Alpha 3 in the mission might serve as example; "I just hope I don't accidentally fire on one of them in the heat of battle. Old habits die hard". Some other lines were later dropped in favour of the present ones, such as "Enemy at three o'clock high!", "Sir watch your tail" and "Enemy fighters just appeared on radar".

All of this is record, and well documented in a plethora of screenshots. Should I post the ones I have, you think? These mythical missions were finished, playable, completely voiced and are -- for better or for worse -- canon. Whatevenmore, they do exist. Somewhere. Probably in a drawer at Volition. Or at the OGR office. Or in a PC Gamer cupboard. Forgotten. Me wants them. By the way, what do you mean with "hosting them on HC"? What on Earth™ is HC? Selectah 03:15, 7 December 2007 (CST)