Difference between revisions of "GTC Bellerophon" 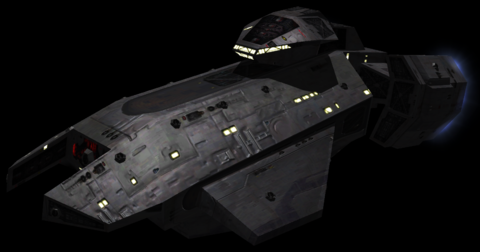 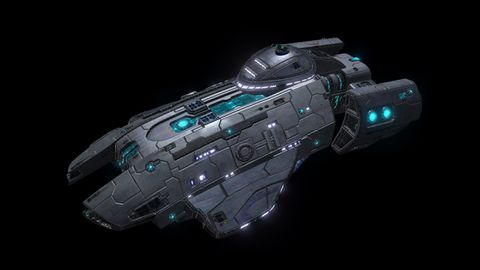 After Capella Incident, Han-Ronald Corporation executive director decided to get back to production of ships larger than 150m by a special request of Security Council. Gaining advantage from research of shivan technology done by Nankam Aeronautical in their Project Vali, Han-Roland's engineers had access to the most sophisticated and advanced technological solutions available for the Alliance. First from new line of warships, the Bellerophon was designed as fast, agile warship capable of responding to suddenly appearing treats in the remote sectors. Designed to fight shivan light cruisers, fighters and bombers, the Bellerophon quickly replaced aging Fenris cruisers and become mainstay escort unit of the GTVA. Armed with 7 anti-fighter beams, single, next-generation, spinal beam cannon and lots of additional point-defence turrets, Bellorophon is a joy to escort for attending fighters. A complement of Bellerophons is already delivered to the biggest fleets. Bellerophon-class cruisers are expected to serve GTVA fleet for almost 50 years thanks to versatile mainframe designed to be easily customizable.

In 2388, the Admiralty requested a dedicated cruiser-scale offensive platform, capable of supporting task groups of corvettes and destroyers with shockjump tactics. In response, Han-Ronald produced the Bellerophon. Designed with a simple set of priorities: powerful guns, maximum survivability, good reactor and power systems. Armored in corvette-grade collapsed-core molybdenum plating, and filled with the latest automated systems to collapse crew count and minimize inhabited hull space, the Bellerophon is incredibly difficult to kill. A spinal corvette-grade anti-warship beam serves as primary armament, supported by a pair of plasma cannons, and a quick-charging subspace drive gives the cruiser impressive strategic maneuverability. Laser turrets, flak guns, and more than a half-dozen antifighter beams protect the Bellerophon from fighter and bomber strikes. Integration with the PATHFINDER communication standard allows the cruiser to coordinate TAG support for friendly fighters or to organize mass shockjump strikes against hard targets.

The greatest failings of the Bellerophon are the prices exacted by its strengths. Integration of the Bellerophon's tactical systems resulted in cramped living spaces unfavorably compared to the three-decades-old Aeolus, leading to the Bellerophon receiving the unflattering nickname 'sardine can.' Furthermore, the Bellerophon is incredibly expensive to produce, and has met with considerable resistance from fleet commanders and members of the General Assembly who feel that cruisers are no longer suited to an offensive role. The Bellerophon also has an extremely long logistics train for a ship of its size, which limits the number of cruisers any fleet could support. As a result, the cruiser was only produced in limited quantities until the outbreak of the war with the Earth Alliance, and most members of the class are still deployed to rear-area units.

Original model was released without tables. The ship name is taken from the pof name, the 'GTC' part was revealed by Woomeister in Eyecandy Thread of Inferno. Nyctaeus released it as a medium cruiser, while in Inferno Nostos it appears as strike, heavy unit.