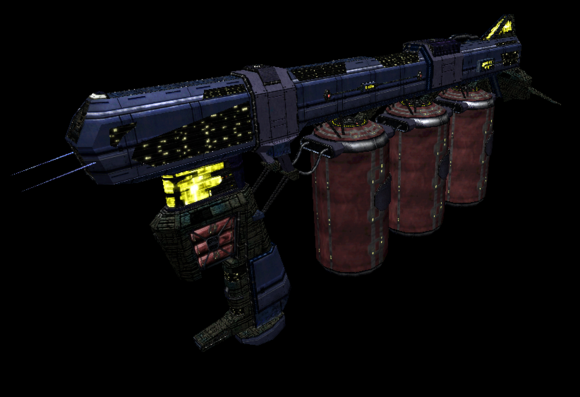 The ORGT Pluto is a user-made terran gas tanker from Exile mod.

Designed long before the Rim Conflict as a deuterium collector, mobile refinery and fuel storage vessels for growing GTA fleet, this over 1km long vessel was never supposed to leave Sol system. In favor of much smaller and versatile Bromios-class, the Pluto operated mostly in high atmosphere of Jupiter, Saturn, Uranus and Neptune, collecting deuterium for civilian market or for Sky Garden-class refinery stations, supplying the Fleet. Many of these vessels were finally sold off to civilian mining corporations after ORS rebelion and launch of Hephaestus-class multi-role industrial ship, but some of them remained. Lightly armed and armored with only few defense turrets, Pluto were easy targets for Federation and later, Shivan fighters. When the Pluto is blowing up, all ships are advised to keep safe distance, as the gas tanker has enormous impact explosion.

Future versions of this will probably include many destroyable subobjects.

Pluto was the ruler of the underworld in classical mythology. The earlier name for the god was Hades, which became more common as the name of the underworld itself. In ancient Greek religion and mythology, Pluto represents a more positive concept of the god who presides over the afterlife. Pluto is also other name a god of mineral wealth, because mineral wealth was found underground, and because as a chthonic god Pluto ruled the deep earth that contained the seeds necessary for a bountiful harvest.