AWOL is an acronym for "absent without leave."

There is no "best way" of doing the AWOL debrief. It depends on the mission's complexity and the mission designer's skills (more so on the former). This tutorial will demonstrate the method its author follows. It will not claim this methodology to be the "best," "most reliable," or "simplest." It will merely give the reader a rudimentary understanding of the subject.

Creating an AWOL debriefing stage can be explained through the same example mission that was used in the Return to base directive article. This tutorial presupposes a basic understanding of debriefing stages. If this is the first debriefing stage that you are planning to make, this may be too complicated.

In this mission, the player's wing was launched to destroy an Aeolus cruiser, named Gorre. The Aeolus jumps out after 45 seconds. This means that there are two possibilities to end the mission legally: The first is to destroy the cruiser, the other entails the Aeolus escaping. If the player jumps out before either outcome happens, he will be considered a deserter, and will receive the AWOL debriefing.

Before discussing the debriefing stage itself, we must go to the Events Editor and create an Event that deals with the "legal" outcomes. 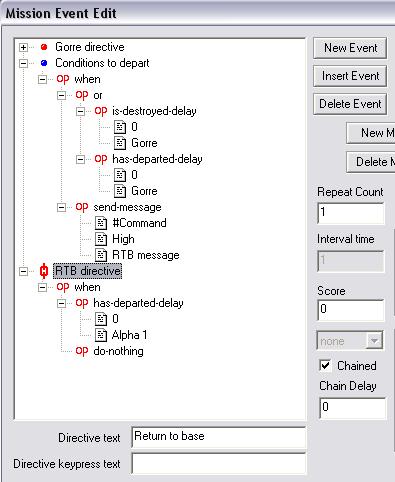 The "Conditions to depart" Event collects all the conditions that are necessary to permit the player to jump out. In this example, the Gorre must either be destroyed or escape. If the player jumps out before either comes true, the "Conditions to depart" Event will turn false. It will turn false because in the instant the player jumped out, the Aeolus (Gorre) was still intact (not destroyed), and did not depart. Note that this Event will only check if the player jumps out after receiving authorization; the outcome of the mission is secondary when discussing the AWOL debrief.

The "Conditions to depart" Event in its current state has nothing to do with the debriefing yet. The mission must be told to put this Event to use in the Debriefing Editor. 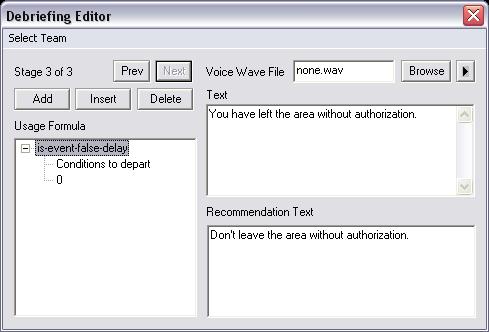 Our Debriefing Editor looks like this. If the "Conditions to depart" Event turns false, our AWOL debriefing stage will appear.

You did not have authorization to return to base, pilot. Your actions jeopardized the lives of those involved in this mission and the GTVA's objectives in this theatre. Desertion is grounds for a court martial, and you are confined to quarters pending your preliminary hearing. Until a military court decides otherwise, you are hereby stripped of your wings and all privileges bestowed upon you as an officer of the Galactic Terran-Vasudan Alliance.