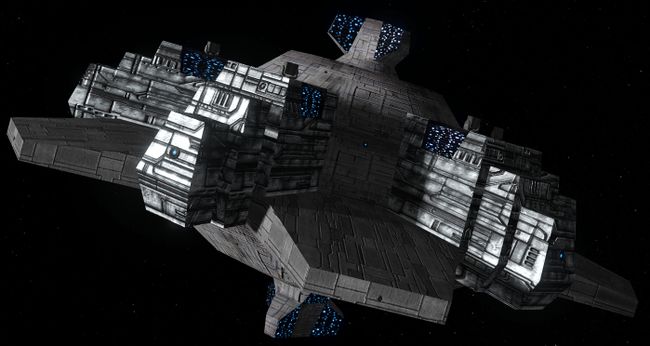 Giant extensive installation with a diamieter of 3 kilometres in the widest point was designed by independent corporation of StrattCom Industries with main office located in Barnard's Star. Tartarus installations were occasionally used by the GTVA military, but they became the most popular as bases of mercenary groups and corporations that wanted to coordinate their businesses and operations in weakly colonized, dangerous sectors of the Alliance space.

Raider's Pride, Cerberus installation we discovered in the atmosphere of Imorkan IV in KY Cygni, was a considerably upgraded Tartarus installation. We believe the original base was built in the early stages of KY Cygni colonization when all Terran colonies in the system were under threat of pirate attacks. Numerous bases were located on Imorkan IV for they were almost 100 percent self-sufficient thanks to hydrogen fuel refined from almost non-depletable Imorkan's gas resources. Cerberus could have used an abandoned space station or construct a new one that remained undetected until tracking device aboard one of rebel cruisers revealed its location. Raider's Pride's armour was much heavier than standard Tartarus' one, comparable with Nareos'. It was armed with 8 beam cannons and 6 LRT launchers in total. Strategically placed hangarbay was almost indestructible from outside so that the enemy could constantly deploy additional fighter and bomber wings. Eventually the Raider's Pride was destroyed by the Wolf's Fleet's forces and its remaining crewmembers left the station in the escape pods and became prisoners of war.

Big, blocky, lowpoly and heavy. Usually comes with lots of hitpoints and multiple beam cannons, but actually firepower of this station can be easily avoided by attacking from below.