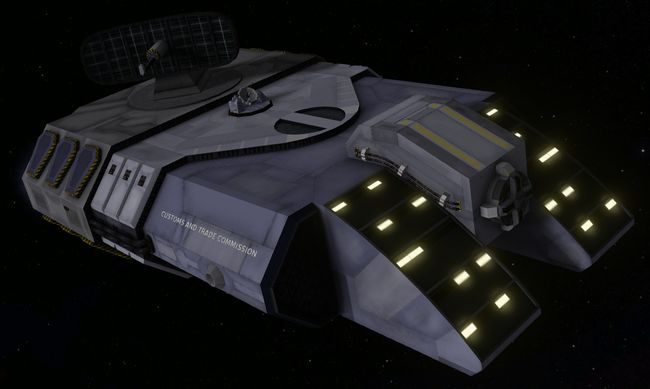 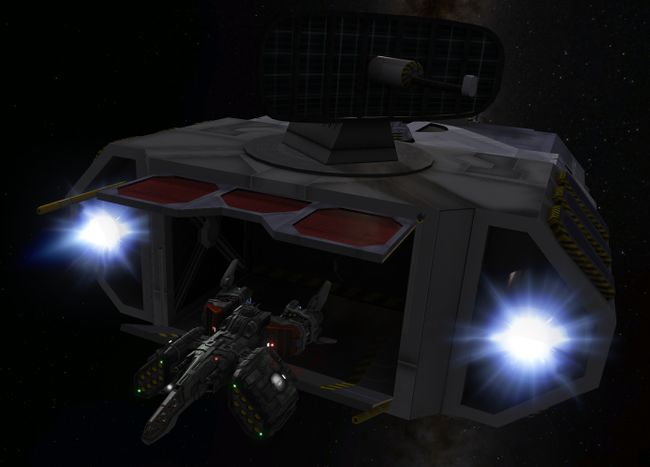 A view of a bomber exiting the rear hangar bay

When the Customs and Trade Commission was formed in the aftermath of the Capellan disaster, GTVA command recognised that if the new force was to be able to fulfil its mission, it needed a fleet. It also recognised that no existing vessel would fulfil the specific requirements of the CTC, and that a new vessel would be required.

Designed for the kind of low intensity, low range work the CTC is tasked with performing, the Praetor became that new vessel, a small, low endurance, low cost, microcarrier-cum-light cruiser. At just over 200m in length, the Praetor is the smallest capital ship in GTVA service tasked with a direct combat role, but its modern design makes it a near match for a Fenris class cruiser in offensive output, while its speed, armour and subspace manoeuvrability exceed those of the Fenris considerably. Additionally, the Praetors sensors and communication interception capabilities are state of the art, exceeded in capability only by AWACS vessels such as the GTA Charybdis. As a result, the Praetor is unmatched in detection of clandestine cargoes and the interception of the narrowbeam or low detectability transmissions often used by criminal elements.

Most of the internal volume of the Praetor is taken up with its launch bay, which is capable of supporting up to eight smaller craft - typically Mercury class shuttles, but also on occasion the CTC Scimitar class patrol fighter. The presence of this bay limits the endurance of the Praetor considerably - even when fully stocked, the ship can not remain on active duty for more than a few weeks without resupply.

The rear hangar bay actually has animated doors that open and close automatically when the hangar paths are in use.