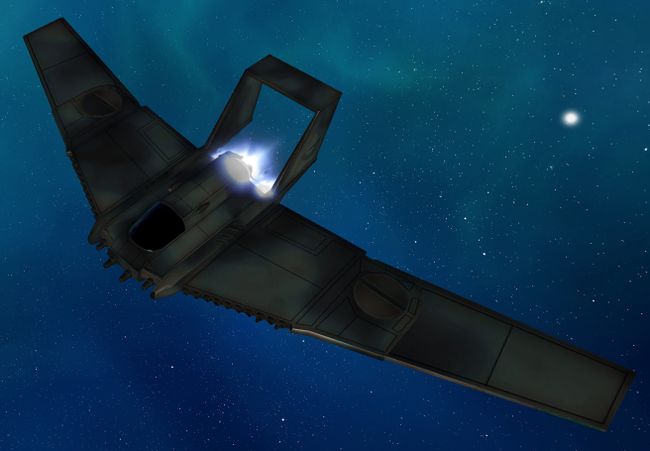 Chippewa IIC - The Chippewa IIC was developed and used by Clan Mongoose during the Golden Century. Keeping with the heavy-hitting role of the original Chippewa, the IIC mated an advanced Targeting Computer to several ER Lasers, while Streak SRMs and LRM rounded out the weaponry

House Davion modification, eliminating two of the Large Lasers for an extra 9.5 tons of armor.

Designed by the Star League, the heavy Chippewa isn't extremely fast, but it has an impressive array of armament. Mostly used in the Lyran Commonwealth, the Chippewa has become House Steiner's main heavy fighter. Prior to the start of the First Succession War Steiner captured the Bowie Industries plant on Dell, where W5 models were produced until House Kurita successfully destroyed the plant in a raid.

A heavy fighter, the Chippewa utilizes its large wings to provide added maneuverability when fighting in an atmosphere. The outer portions of each wing can retract inward, allowing for the fighter to be stored aboard transports more easily.

CHP-W5 Short or long range, it is best to stay away from a Chippewa. With the Exostar LRM-15 and SRM-6 racks to the front, backed up by two Martell Medium Lasers in the nose and four McCorkel Large Lasers in the wings, the Chippewa can lay down a devastating first strike. For rear protection, two McCorkel Small Lasers are mounted to the rear. The Chippewa was the first SLDF fighter to mount specialized Laser Insulators, however the technological know-how to produce this insulation was lost during the Succession Wars and later models were built without them.

This version of the Chippewa drops the SRM-6 and upgrades the Large Lasers to extended range models. It also adds Artemis IV to the LRM racks and carries twenty-five double heat sinks.

The personal Chippewa of Michael Gladstone, a deserter from the Lyran Regulars, the Chippewa Gladstone can be found near the Rim Collection acting as an escort for various merchant DropShips and JumpShips. Modified to carry a pair of Extended LRM-15 launchers in the nose, Gladstone can engage enemy forces from much further out than they expect. The standard armor has been removed and replaced with Laser Reflective Armor, which means energy weapons are far less effective against the Chippewa. If an enemy does manage to close with Gladstone they'll receive a rude shock: Ten ER Medium Lasers and enough Double Heat Sinks to use them. In the technology-starved Periphery, the Chippewa Gladstone is one of the most effective and fearsome AeroSpace Fighters in service.