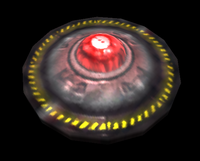 Countermeasures are small objects deployed from the rear of a fighter or bomber, designed to prevent enemy heat or aspect seeking missiles from impacting onto a fighter's hull. Though the precise methods by which they do this have never been fully explained, they presumably work in a manner similar to modern countermeasures, i.e. by producing chaff, a false heat signal, or emitting some other signal to confuse the targeting systems of the pursuing missile.

Countermeasure systems are used by all three species in the FreeSpace universe, and have been present on Terran fighter craft since at least the end of the 14-Year War, probably longer. The number of countermeasures equipped on each fighter varies, but is typically around thirty.