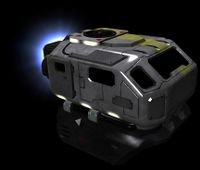 The Hermes, an example of an escape pod.

An escape pod was a small-size device used for escaping when a starship was in imminent danger of destruction. Traditionally, "nonessential" personnel were evacuated first.

Two classes of escape pod existed between the eruption of Terran-Vasudan War and the Destruction of Capella: the Terran GTEP Hermes and the Vasudan GVEP Ra. However, in keeping with Vasudan philosophies, the latter craft is rarely used to evacuate personnel, instead being employed to preserve records and other data that could be of use to the allies.