The Origin of the Challenge

A few people have been looking for hidden "features" and Easter Eggs in FreeSpace. Only a small handfull were found, such as these:

For a game the size of FreeSpace, that wasn't very many. But there was at least one hidden bit of FreeSpace trivia still unknown to the majority of the FreeSpace community. So, in a mixture of abundant slap-happiness, youthful humor and a really bad pun, the idea for the contest was born.

Somewhere hidden in one of the FreeSpace graphic game files, there is someone that is mooning you. Yes, "mooning" -- that juvenile prak where you show your bottom to the rest of the world. On Wednesday, May 12, 1999, I challenged the FreeSpace community to find this file, which several of us in the know believed that no one would be able to find. The rules were this:

We're not sure that anyone actually could find it, but it IS there somewhere. When you're told where it is, you'll kick yourself. :) Read on...

All right, I couldn't help but think of good old Bobcatt when thinking of rear ends. :P You could call it part of his charm (and he does all those cute Disney cartoon voices, too!)

Most of the answers were submitted rather early on Wednesday evening. Here are three of the more interesting responses, along with the images they refer to:

Vision of the Moon

"...in the Freespace reference bible (pdf file) there is a screenshot taken from the opening movie. A head shot of the panicked GTA Pilot. His eyes are staring up to the left. Following his eyes, you can see three or four small images. I think its part of the cockpit. These images appear to be of someone bending over and mooning the pilot, with the full moon appearing closest to his eye. You have zoom in quite a bit, butt it really, really looks like it." - from Ray

Well, actually, it is part of the cockpit. This was perhaps the most imaginative answer I received. Like an inkblot test, sometimes you find what you're looking for only out of the imagination of your own mind. In this case, it's merely a vision of a moon. Not a winner, but a good guess. 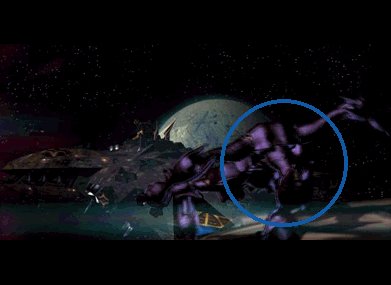 "Well, this probably doesnt count, but on CrIm09.pcx, theres a Shivan Space Marine showing his naked, ugly and purple ass to not just the rest of the world, but the entire universe." - from DreAdFaq

Hmmm...that's not the answer I expected. I suppose it could be a correct answer, but do Shivans even have asses? Perhaps we should ask a certain South Park mad scientist to clone them a few if they don't. But the contest (as re-explained) did mention that we were looking for game graphic images. And images from the Silent Threat secret directory aren't game files, they're extra goodies to reward fans. Still, at least it is the rear end of something and there is also a real moon in the back to boot. This would have been a fun one to win...a "double moon" if you will. But, no soup for you. 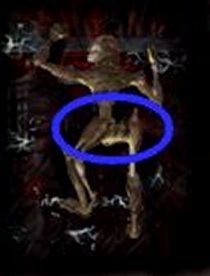 "You people must be really bored to come up with this....I must be even more bored to try to find it...." - from Sewer Urchin

No comment, since anything you say can and will be used against you in a court of law.

This image of Vasudan roadkill was taken from one of the model textures (skins for those who play that Other Ground-Based Shooter that We Don't Care About ™) for the Vasudan Escape Pod.

This submission is very interesting, certainly not something I had thought of even though I was aware of this one. Sometimes it takes a contest to remind you that something you're used to is in fact an easter egg. Certainly Vasudans do have rear ends, but this isn't what I was thinking of, since it required opening up the graphic files. We're not that sadistic (despite allegations to the contrary received yesterday by ICQ). A very good guess, and we'd give him a prize except....

We Have a Winner 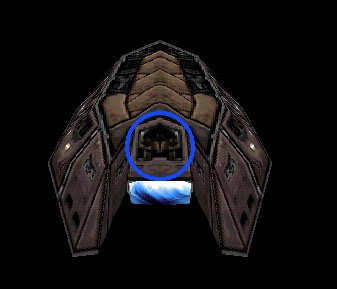 "I really didn't know where it was, but i figured it had to be on some obscure vasudan ship since a shivan ship wasn't likely to have a mooning shivan (how could you tell?) and all terran ships are too common to put an easter egg like that in... escape pods and support ships were my first guess, looks like it was a good one." - from Sewer Urchin

We're not completely sure it's fair to sweep both runner up and grand prize winner, but Sewer Urchin did have the answer we were looking for. He identified the Vausdan escape pod as the correct ship and the back window of the ship as the specific part of the ship where you're mooning. And, in fact, this is the appropriate place to put this type of joke. Most "mooning" I can recall happened from the back of a packed schoolbus. Why should Vasudans be any different? Maybe there is a ritual in the Vasudan culture to "moon" your opponents, in an act of spite and defiance, when you must flee from battle.

Congratulations to Sewer Urchin. When we can think of an appropriate prize, we'll be sending one in the mail. In the meatime, I'll be trying to think of sending something other than Moon Pies (a frozen ice cream product which I doubt would ship well). Perhaps someone has a great idea for a prize (with an appropriate theme and less than $30 value), if so send your prize suggestion to me.

What did we learn?

Perhaps the monkey currently being used as a placeholder for distant planets should be left in the game somewhere for us to find. Or maybe we could have a few of the running jokes in the FreeSpace community added into the game somewhere. What about a hidden pilot picture of Mr. T? Or maybe some anime-inspired ships. What about having a capital ship weapon on a fighter? Or maybe make a few of the FreeSpace2 rumors actually become true.

Sure, the FreeSpace community could make these cool toys themselves. But it's always a little more fun to have them already there, and all we in the community need to do is look hard enough to find them. We're a clever bunch out here...challenge us to find them and we will, given enough time and an incentive to find them.